About 200 lorries carrying fuel for NATO forces in Afghanistan destroyed in attack by the armed anti-government group.

Taliban fighters have set fire to about 200 oil tankers supplying fuel for NATO forces in an attack just outside the Afghan capital, police say. 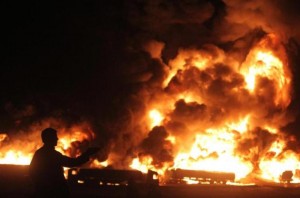 Television footage on Saturday showed black smoke above the site of the attack in Kabul, with the charred wreckage of dozens of lorries scattered around a vast parking space.

The Taliban, whose fighters are battling to overthrow Afghanistan’s government, claimed responsibility for the attack.

It was unclear how the fire was started. Some Afghan media reported that Taliban fighters had fired rockets at the tankers late on Friday.

There were no immediate reports of casualties.

“The number of tankers on fire is not yet clear, but based on preliminary reports from police around 200 tankers have been burnt,” the Interior Ministry said in a statement.

The incident took place in Chawk-e Arghandi and comes as the Taliban steps up attacks on NATO forces due to complete their withdrawal from the country by the end of the year.

In a separate incident on Friday, the NATO-led International Security Assistance Force (ISAF) said a rocket attack at the main US military base at Bagram airfield had resulted in “minor damages to equipment and one building”.

The attack happened as Afghanistan prepared to announce preliminary results of the final round of a presidential election on Monday in a tense atmosphere.

Each of the two candidates hoping to succeed President Hamid Karzai accuses the other of large-scale fraud.