A least six people have been reported killed in a Taliban attack on an Afghan intelligence building in the eastern city of Jalalabad, sources told. 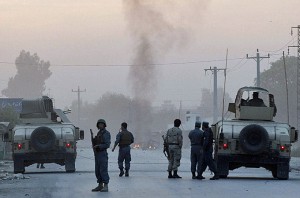 The attack early on Saturday began with a suicide car bomb. Security forces battled with an unknown number of Taliban fighters for an hour before authorities were able to put down the attack.

He would not say how many attackers were involved or whether they were all killed or some escaped. He said authorities were searching the grounds.

Hospital officials told that at least six people have been killed in the attack, and 45 wounded. Both civilians and members of the military are among the dead.

The intelligence service has regularly been targeted by the Taliban.

In December 2012, NDS head Asadullah Khalid was seriously wounded in an attack by a Taliban “envoy” who detonated an explosive device hidden in his underwear.

Jalalabad is one of Afghanistan’s biggest cities, sitting on a major trade route into neighboring Pakistan. But the city is also located in one of the country’s most troubled regions.

The Taliban have stepped up attacks on symbols of power in recent weeks, seeing to destabilize the fragile Afghan state which is in the midst of a political crisis over the appointment of a new president to succeed Hamid Karzai, who has led the country for 13 years.