Despite Egyptian president’s visit to Khartoum, the two neighbours appear far from resolving their long-standing issues. 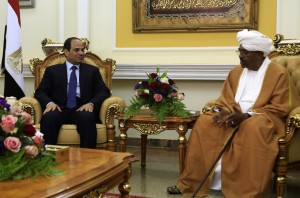 Egyptian President Abdel Fattah el-Sisi’s efforts to reach out to the neighbouring regime in Sudan are being thwarted by increasing evidence that Khartoum is funnelling weapons from Iran into North Africa.

On June 27, Sisi arrived in the Sudanese capital to sit down for talks with Sudanese President Omar al-Bashir. The visit was the first of its kind since Egypt’s ousted former President Mohamed Morsi met with Bashir last August.

The day after Sisi’s June 28 visit, a United Nations panel of experts concluded that a shipment of weapons bound for Sudan, which was seized by Israel in the Red Sea in March, had been sent by Iran. The weapons (which were concealed in a cement shipment) included 40 M302 rockets and some 180 120mm mortars.

Sisi’s visit was intended to thaw relations between the two countries, which have been tense since the Egyptian military’s removal of Morsi on July 3 last year, and the UN report came at an embarrassing time for Sisi’s efforts to further cooperation.

Sudan’s government has always been seen to be close to Egypt’s Muslim Brotherhood movement, which Sisi’s government has deemed a terrorist organisation. According to Albaqir Mukhtar, director of Sudan’s Al Khatim Adlan Center for Enlightenment and Human Development, links between Sudan and Egypt are ideologically, as well as strategically and economically important.

Although most trade between Egypt and Sudan is informal, the volume of official trade still amounts to almost $750m annually.

“Until now the government of Sudan has had relations with the Muslim Brotherhood, which makes things complicated, but it’s a natural goal for Egypt to have a good relationship with its neighbour,” said Amany al-Taweel, Africa analyst at Egypt’s Al-Ahram Center for Political and Strategic Studies.

“But Sisi also needs the support of Sudan in the Renaissance Dam project negotiations, and Bashir needs support from Sisi because of internal political struggles in Sudan,” she told. “Economically this relationship is important, with many prospects for cooperation, especially in agriculture, so a strong relationship is possible,” she said.

But Sudan has been repeatedly accused by Western and North African authorities of facilitating weapons smuggling from Iran into Eastern Libya, the Sinai peninsula (where they can be procured by Egypt’s leading hardline group, Ansar Bayt al-Maqdes), and the Gaza Strip.

Sudan has denied the claims, with military spokesman Al Sawarmy Khalid Saad claiming there is “no truth” to them in a statement last year.

Sisi’s trip was predicated on previous meetings in which Khartoum had pledged to work with Egypt to secure their shared border against arms smuggling. Relations between Cairo and Khartoum have long been strained, with ongoing disagreements over issues such as the Renaissance Damproject and the Hala’ib Triangle border dispute.

Tensions began to ease after Morsi won the 2012 Egyptian presidential elections and subsequently gave a speech to the UN backing Bashir. The military regime that ousted him was intent on combating Sinai-based fighters that it believed were receiving arms smuggled from the south. It too began to make tentative moves to bring Khartoum on its side.

In Khartoum, President Sisi said: “The political situation in the region requires coordination and cooperation between the two Arab states”.

“Sudan has been involved for several years in smuggling along the coast and into the Sinai Peninsula, and has backed the Muslim Brotherhood. However there are now some voices in the regime who want reconciliation with Egypt,” said Alden Young, a post-doctoral fellow at the University of Pennsylvania’s Department of Africana Studies, and a Sudan specialist.

“There is a feeling weakness within the ruling National Congress Party and it’s a feeling of economic weakness as well as political weakness – the regime can’t afford conflict with Egypt or the Gulf states,”.

At a press conference at Khartoum airport, the Sudanese President claimed Sisi’s visit would “push Cairo-Khartoum relations forward along in the right direction”.

But other signs that rapprochement isn’t going as smoothly as planned have appeared. In May, Sudan’s Foreign Minister Ali Karti accused the Egyptian intelligence service of funding armed opposition groups in Khartoum.

Sudan is also involved in diplomatic talks to shore up alliances with other countries besides Egypt. On June 3, the FARS new agency reported that Iran’s new ambassador to Khartoum, Shabib Jurijari, held meetings with Kurti to discuss “all-out ties” between the two countries.

Neither the Egyptian nor Sudanese foreign ministries responded to Al Jazeera’s repeated requests for comment on the Red Sea weapons shipment.

“I don’t think Sudan is serious about stopping weapons smuggling, but there could be some effort to stall it for a while,” said Andrew Hammond, Middle East analyst at the European Council on Foreign Relations.

“And I don’t see rapprochement in any real sense happening any time soon with Egypt, which is in many ways the weaker party here: it needs Sudan on board in its dispute with Ethiopia over Nile water. Ever since Bashir came to power in 1989, the regime has enjoyed keeping Egypt at a distance,”.