Foreign governments and organisations have expressed concern as reports of deadly rioting and arson attacks by Buddhist mobs in Sri Lanka continue for the second day. 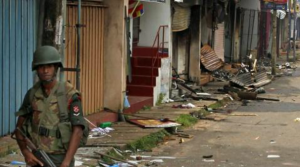 The latest surge of violence has prompted the United States to call on the Sri Lankan government to end the violence.

“We urge the authorities in SL to investigate these attacks and bring those responsible to justice,” Nisha Biswal, US assistant secretary of state for South and Central Asia, said on  Twitter on Tuesday.

The US embassy in Colombo on Sunday condemned the violence that has so far left at least four people dead and more than 80 people wounded, with large-scale destruction of property.

For her part, Navi Pillay, the UN human rights chief, expressed concern that the religious riots could spread to other areas of Sri Lanka and demanded that the government immediately bring the perpetrators of Sunday’s attacks to justice.

“The government must urgently do everything it can to arrest this violence, curb the incitement and hate speech which is driving it, and protect all religious minorities,” she said in a statement issued in Geneva, Switzerland.

At least one person said to be a Tamil security guard was killed in overnight violence in Welipenna, on the outskirts of Aluthgama, the worst affected town, while a mosque was allegedly set on fire despite the announcement of an indefinite curfew.

“We have been forced to defend our homes because the police and army are doing nothing. We asked them to come last night and they only arrived after the mobs burnt the mosque,” Abdul Maulana, a shop owner in Welipenna.

“More than a dozen houses and shops have been burnt overnight,” a police source told AFP news agency from Aluthgama although there were no reports of fresh violence in the neighbouring town of Beruwala.

Hundreds of soldiers have been deployed to help police which said that the curfew would remain in force although residents would be given a four hour window to stock up on provisions till noon (06:30 GMT).

Local Muslim leaders are accusing authorities of doing little to prevent the deadly riots that have made hundreds of Muslims homeless after attacks on their homes, shops, factories, mosques and even a nursery.

“My neighbours have been hiding in my house for the past two days …. The police never came, finally the mob broke in and assaulted us. They destroyed our computers and took our money,” Mohammed Fahar, a resident of Aluthgama, said.

However, NK Illangakoon, a local police officer, told AFP news agency that the situation was “improving” although the curfew was in place through Monday night.

He said eight people had been arrested in connection with the riots, but added that an unspecified number of them had already been freed on bail.

Dinesh Siriwardena, a Sinhalese resident of Aluthgama, said: “I do not know where these mobs came from.

“We have been told by them to hang Buddhist flags outside our homes so we can be identified.”

Meanwhile, Justice MInister Rauff Hakeem, the most senior Muslim member of President Mahinda Rajapaksa’s government, has threatened to resign at the decision to allow members of the Sinhala Buddhist supremacist organisation Bodu Bala Sena (BBS) to stage a rally in the riot-affected area.

“The government allowed the BBS to hold their gathering and therefore they must take responsibility for what has happened,” Hakeem said, referring to the group which is also known as the Buddhist Force.

Hakeem said he was now under pressure from his own supporters to quit the government in protest at its failure to prevent attacks on the Muslim community, the latest in a series of violent incidents involving the BBS.

But other Buddhist groups have distanced themselves from the riots.

Davuldena Sri Gnanissara Thero, the Mahanayaka or great chief of the Sri Lanka Amarapura Maha Nikaya sect of Buddhist monks, told Al Jazeera: “Sri Lankan Buddhists have lived in harmony with the other communities in Sri Lanka and we must strive to maintain this. The recent events have left an uneasy tension in the country, and this must be resolved through discussions with all relevant parties.”

He refused to comment on the actions of the Bodu Bala Sena, saying that all groups must act with restraint.

The unrest erupted on Sunday night when followers of the BBS staged a protest over a recent road rage incident in the mainly Muslim towns which are around 60km south of the capital, Colombo.