Government celebrates five years since end of conflict with Tamil Tigers, and bans commemorations for victims. 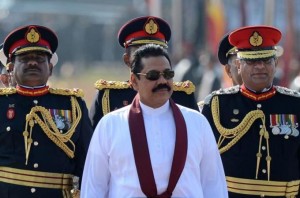 Matara and Colombo – Sri Lanka’s government has marked the fifth anniversary of the civil war victory over the separatist Tamil rebels, while remembrance services for ethnic Tamils killed in the conflict were broken up by the police.

President Mahinda Rajapaksa presided over a Victory Day ceremony on Sunday in his southern home town of Matara, where military personnel paraded in the streets with tanks and artillery guns, while fighter jets flew overhead.

The president said that the victory was testament to the bravery of the armed forces and was a signal to the rest of the world of what Sri Lanka was capable of.

He accused the Tamil diaspora of working against the peace and reconciliation in the country, while adding that his government would “not allow any external pressure to prevent them from celebrating the end of the conflict”.

Earlier this week, Canadian High Commissioner to SriLanka, Shelley Whiting, released a statement explaining that she would be boycotting the parade. She urged the government to move past the wartime discourse and work towards serious reconciliation.

This year’s celebrations were the first to be held outside of the capital, Colombo, where a separate commemoration event will be held on Monday at the war memorial outside of parliament.

“The decision to hold the celebrations in another city was a sign that the country was united in its praise for the armed forces,” Kehiliya Rambukwella, minister of mass media and communications and Cabinet Spokesperson said.

The increased prominence given to the armed forces falls in line with the government’s designation of May as being “National War Hero” month.

Meanwhile, the police and armed forces prevented members of the Tamil National Alliance (TNA) – which rules the Tamil majority Northern Province – and civil society groups from holding memorial service for the war dead.

Raagusathan Krishnamurthi, a former lecturer at the University of Jaffna, criticised the government’s continued promotion of the armed forces.

“If the government is serious about reconciliation then they must move beyond solely memorialising the military. Thousands of civilians, Sinhalese, Tamils and Muslims, gave their lives during this conflict and they must be all remembered,” he said.

Krishnamurthi accused the government of monopolizing the commemoration events by closing the Jaffna University located in the former rebel stronghold in the island nation’s north.

But Rambukwella, who also acts as Cabinet Spokesperson, denied the accusations saying “it was not the government but the university administration who took the decision to close the university”.

He said that commemorating the rebels, known as Tamil tigers, was illegal and would not be permitted.

The government commemorates the anniversary every year since the Tamil rebels were defeated in 2009. Only individual families are allowed to pay tribute to their loved ones who were killed in the war.

The UN has estimated that at least 100,000 people died in the entire conflict, about 40,000 of them in the final months of fighting.

The unusually high number of civilian casualty has put focus the conduct of the government forces during the final stages of the war. United Nations Human Rights Commissioner, Navi Pillay, has called for independent investigations into allegations of war crimes being committed by the SriLankan army as well as the Tamil rebels.

The government has rejected that its armed forces were involved in war time atrocities.