Mr. Speaker; I am grateful to you and the House for providing me this opportunity to express myself. 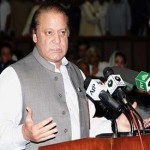 I will take the house into confidence at a later date on the government’s efforts with respect to the issues and challenges that the country is facing. Presently, I want to confine myself to the problem of terrorism.

The government has reached a clear stand and strategy to eradicate the menace of terrorism, on which today I want to take the nation into confidence through your inter-mediation. Democracy is all about consultation and safeguarding the welfare of the people. We consulted all the stakeholders on the issue of terrorism and obtained the opinions of all political parties in the All Parties Conference (APC). I remained in constant touch with the state agencies and consulted intellectuals as well as scholars. I also spoke to the elected representatives. Today, I want to share with the nation as to what conclusion did I reach as a result of the collective wisdom.

Power is a gift of God and the trust of the people. We are answerable for our performance to Allah and to the people of Pakistan. The security and safety of the life and property of the people and ensuring law and order is the prime responsibility of government and a constitutional obligation. This is what our religion also teaches us. The government is therefore, duty bound to relieve the people from fear and to ensure that their life and honour are well protected.

Today, the people and institutions of Pakistan are at the victims of terrorism. Common citizens are being attacked and our innocent children are dying. The whole society has been subjected to extreme fear. I consider it as my responsibility to protect the life and property of the people at any cost and that it is the top priority of the government.

You know very well as to how far these terrorists are following religious teachings when they are playing with the life and property of innocent people. Every Muslim knows that killing one person amounts to killing the whole mankind. Every common person knows that such an attitude is against the commands of Islam and no religious scholar will ever canonize it. All religious scholars right from Pakistan to Saudi Arabia agree that terrorism has no links with Islam. In the respect of human life and property, Islam even does not acknowledge any religious distinction but respects every human being. The Holy Quran ordains life for life. So it is the responsibility of the state to provide justice to the unlawfully murdered. The Prophet Muhammad (PBUH) had emphasized this in his last sermon. He asked his followers, “Is this not the month of Hajj? All replied, “Yes it is”. Then he asked again, “What day is today? Is it not the day of sacrifice?” Every one replied, “yes it is”. Then he asked, “Which city is this? Is it not the city of peace? Every one said, “Yes it is.” The Holy Prophet said, “Your blood, your property and your honour are as sacred as this day, this month and this city of Makah. The same theme was narrated at another occasion in these words, “the sanctity of human life is superior than the sanctity of Biat al- Allah (the Kaaba).

No greater words can be uttered in the respect of human life than what our Holy Prophet has said. Our constitution also says the same. As such, the protection of life and property of the people is a religious and constitutional obligation of the government, which it cannot overlook.

You know that the nation is bearing the wrath of terrorism for the last 14 years. It is primarily an outcome of the decisions of an unconstitutional government and a dictator who created this mayhem. We categorically disagreed with these decisions while in opposition, and maintained that national interest must come first. For dictatorship, the first priority is always to preserve power, and while doing this pugnacity was allowed to prevail in the country. Today, we are reaping what was sown in the days of dictatorship. Terrorism has claimed thousands of precious lives of citizens, religious leaders, scholars, army and police personnel, women and children as well as members of minorities.

Yet we offered the terrorists to come to terms with peace. The APC also authorised the government to hold talks with the militants. We invited them to talks so that they do not kill innocent citizens and refrain from disturbing peace, and to respect the country’s constitution. Unfortunately, they did not positively respond to our offer and continued to hit Pakistan Army and our civilians. Let me tell you what happened after the APC:

·      Major General Sanaullah Niazi and soldiers of the Pak Army were assassinated and this was proudly admitted (by the terrorists).

·       A church was attacked in Peshawar and our innocent Christian brothers and sisters were killed.

·        Many innocent people were massacred in the Qisa Khwani Bazaar, Peshawar.

·        Polio workers, who are saving children from disability, are being targeted.

A number of terrorist’s incidents took place after the APC in which hundreds of people, including women, children, youngsters and the elderly were killed and wounded. Neither Islam nor any other religion of the world accepts or tolerates this brutality. The government however did not lose patience. Every single terrorist incident was extremely painful for me. I can feel the agony of a mourning mother when she kisses her dead son’s body. I can realize the anguish of the father who lowers the dead body of his son into grave. I have seen the innocent children bathed in blood.

To me every mother is the same whether she is the mother of an innocent child killed by drone in FATA or a mother of the target of a terrorist blast in Peshawar and Rawalpindi.  Their pain is my own and I feel it alike.

The government is doing what it can to stop drone attacks. But we cannot ignore those who are killing innocent Pakistanis on this premise.  Are Pakistanis behind drone attacks? Are the innocent school going children killed in suicide bombing responsible for these? This stand is neither accepted by law, morality nor religion.

The situation is not acceptable anymore. We can no longer allow the massacre of innocent citizens. The reputation of the country is being questioned. Our existence is at stake. We cannot allow the terrorists to take hostage of the country and the nation. Peace is not our choice but our ultimate goal, which will be obtained at any cost and the nation is united on this point.

I know that if today the State decides on the use of force to eliminate the terrorists, the whole nation will stand behind it. However, as the desire for peace has been expressed on the other side, we want to forget the unpleasant past and give another chance to peaceful talks. In order, for the talks to succeed it is, however, necessary that these should be carried out in good faith, which as a first step requires complete stoppage of terrorist activities? Talks and terrorism cannot go hand-in-hand. All the state agencies and the whole nation are united on this stand. This is our joint mission and we have to work for it with complete sincerity of purpose.

As I already said, the protection of life and property is the state’s prime responsibility. I had told in my speech to the nation that we can no longer lift the dead bodies of our children. But we continued doing so during the last seven months in order to pave the way for peace.

For this purpose, I am announcing a four-member committee comprising of Mr. Irfan Siddiqi, Major Aamir, Mr. Rahimullah Yousafzai and Mr. Rustam Shah Mohmand to carry forward the peace talks. Interior Minister Chaudhry Nisar, being the focal person, will assist the committee, while I will personally supervise the proceedings.  I am doing all this in good faith. This play of fire and explosives should come to an end now.

I am grateful to the opposition leader, friends and all those who lent their hand to guide us in this respect. It was agreed in the APC that we will not politicise the issue of terrorism. I expect the opposition members to respect this understanding. I have the same feelings as those of a common citizen and I assure you that I will move forward with full sincerity and earnestness. You shall guide us.  Mistakes are likely to occur, but it is your right to point them out and suggest their remedies. I am grateful to those opposition leaders who have positively commented on our policy. While as for those who criticised us, I am sure that they have done so in good faith and sincerity in their intent. I am thankful to them also.