Annual drill simulating response to a nuclear attack goes ahead despite threats from Pyongyang.

South Korea and the United States have launched an annual military drill despite condemnation by North Korea, according to Seoul’s defence ministry.

The beginning of the “Ulchi Freedom Guardian” exercise, which will last until August 29, came as Pope Francis led a mass for inter-reconciliation in Seoul at the end of his five-day trip to South Korea. 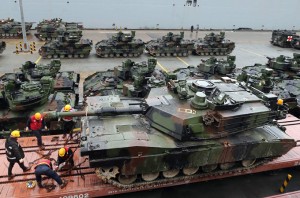 Although largely played out on computers, the drill involves tens of thousands of South Korean and US soldiers and is aimed at testing combat readiness for a North Korean invasion.

According to the South Korean Defence Ministry, this year’s drill will, for the first time, simulate the response to a nuclear attack threat, using a strategy of “tailored” deterrence developed last year at annual South Korea-US defense talks.

North Korea has repeatedly called for the exercise to be cancelled, and last week its military joint chiefs of staff threatened to “mercilessly open the strongest… pre-emptive strike” if it goes ahead.

South Korean officials said its military would be on a heightened state of alert during the exercise.