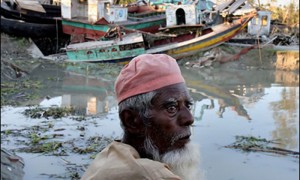 The storm tore through scores of villages overnight on Sunday, uprooting trees and electricity poles and derailing a train in an incident that injured dozens of passengers, they said.

Nine people were killed in the worst-hit district of Netrokona, six died in neighbouring Sunamganj, and one person died after being struck by lightning in nearby Naogaon, police in all three districts said.

Among the nine killed in Netrokona was a pregnant woman and her three children, district police official Rashel Miah said.

“They died after a side wall fell on them,” Miah told AFP, adding that up to 20 people were injured in the district.

About 1,000 homes mostly made of mud and tin were flattened, said government administrator Abul Kalam Azad.

The storm also derailed a train at Tangail district while it was travelling across a bridge over a river.

“The storm was so severe that it threw the train, carrying up to 500 passengers, off its tracks and against a wall,” said railway official Pankaj Kumar Shaha.

Storms known locally as Kalboishakhi often hit Bangladesh during the early summer months in the lead-up to the monsoon that generally begins in the first week of June.