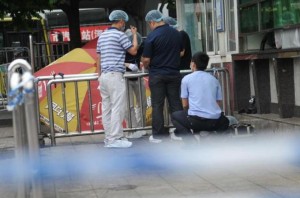 Six people have been wounded in a knife attack at a train station in Guangzhou in southern China, the latest in a string of violent episodes at public transport hubs.

Police shot one of the attackers at the station on Tuesday, the city’s public security bureau said in a statement, adding that all of the injured had been admitted to hospital.

One of the men died, one was arrested, and two escaped, said the People’s Daily newspaper, the official publication of the Communist Party.

The incident comes less than a week after a deadly explosion at a railway station in the restive Muslim-majority region of Xinjiang that left two attackers and a civilian dead, and 79 people wounded.

It also follows a March attack at a railway station in the southwestern city of Kunming, in which machete-wielding attackers killed 29 people and wounded 143 in what many in China have dubbed the country’s “9/11”.