ISLAMABAD: The government claimed on Thursday that the 22-day sit-in on the Constitution Avenue and subsequent political unrest had adversely affected the country’s economy, caused a loss of about Rs547 billion to the exchequer and shattered investors’ confidence.

The loss suffered by the economy included exchange rate depreciation of 4.3 per cent, debt burden of Rs228bn and stock value decline of Rs319bn, said a report submitted to the Supreme Court o 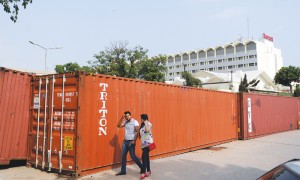 On Wednesday, a five-judge larger bench headed by Chief Justice Nasir-ul-Mulk asked the AG to submit a detailed list of the losses the government had suffered because of the sit-in.

The report is likely to be discussed on Friday when the court will resume the hearing on a set of petitions filed by a number of high court bar associations against the sit-ins in the federal capital by the Pakistan Tehreek-i-Insaf and the Pakistan Awami Tehreek.

The report said the continuing protests had rendered the country vulnerable to terrorist attacks and other security-related risks. It accused the PTI and PAT workers of running a state within the state by having taken the law into their own hands.

The political uncertainty has negatively impacted the country’s financial markets, foreign exchange reserves have declined to $13.521bn from $13.926bn and stock markets nosedived.

The report said that only 40 to 45pc employees of the Federal Board of Revenue (FBR) could attend office because of the blockade of the Constitution Avenue since Aug 16. An extra amount of Rs357.6 million has been set aside from regular budget for law-enforcement agencies to maintain law and order in the capital. Of the total amount, Rs226.772m has already been disbursed and a request for the remaining Rs130.6m was received on Aug 29.

According to initial estimates by the Capital Development Authority, the total damage to the state property caused by the protesters stood at Rs5m, the report said, adding that during the attack on the Pakistan Television headquarters its equipment was damaged and many items reportedly stolen.

So far three people have lost their lives and 717 suffered injuries, including 202 policemen. One police mobile was set on fire and 17 other vehicles were damaged, the report said.

The Trader Association Islamabad estimated a loss of Rs10bn to traders and businessmen and the federal secretariat, which runs the machinery of the federal government, virtually remained closed. The Federal Directorate of Education had to put off the scheduled opening of 422 educational institutions to Sept 2 from Aug 11. As a result 200,000 students could not start their academic session on time.

The report said the protests had tarnished Pakistan’s international image as a number of visits by heads of states and delegations and other important events had either been cancelled or indefinitely postponed.

Throughout their protests, PTI and PAT leaders made an array of threats in their speeches, calling for paralyzing the country, locking down the government machinery, revolting against the government and inciting their supports to violence. But the government exercised maximum restraint, despite the fact that the protesting parties violated the conditions in the form of NoC they had reached with the Islamabad administration of not entering the red zone, the report said, adding that violation made the protests illegal and unlawful.

It said that to ensure safety and security of the citizens as well as the protesters, the government requisitioned 26,973 personnel of police and other law-enforcement agencies, including Rangers and the army.

Around 13 FIRs have been registered and proceedings would be held under relevant laws, the report added.

COVID-Safe Check-In will be MANDATORY