Taliban claims responsibility for attacks in city of Ghazni that have killed at least 18 people and hurt more than 130. 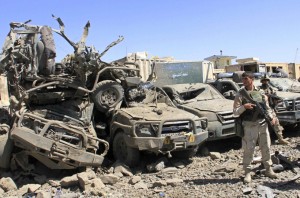 At least 18 people were killed and more than 130 others were injured in the attack, which also destroyed dozens of shops near the government complex. The fatalities included eight police officers, nine intelligence staff and a civilian.

The explosions took place around the same time, in the same area in the center of the city, and was followed by at least three hours of fighting, according to witnesses.

Musa Khan Akbarzada, governor of the province also named Ghazni, told the Associated Press that as many as 19 Taliban fighters had launched the attack. He said 13 of the attackers were also killed after the gun battle with the police.

“The bombs were so powerful that many civilians were wounded because of falling roofs and shattering of windows in their homes,” he said.

The death toll was likely to increase, as rescuers try to dig from the rubble and look for bodies.

In a message, Zabiullah Mujahid, a Taliban spokesman, said that the armed group was responsible for the attack.

In recent months, the Taliban has targeted several government facilities in the war-torn country, which is still grappling with a political impasse following a contested presidential election between Abdullah Abdullah and Ashraf Ghani.

Election officials are carrying out a recount of ballots from the runoff and results are expected next week.

Taliban had taken advantage of the country’s ongoing political vacuum.

“We have seen a lot of Taliban violence in the summer,” she said. “Security forces are on high alert.”

According to recent UN figures, civilian casualties soared by 24 percent in the first half of 2014, while the International Crisis Group has said the “overall trend is one of escalating violence and insurgent attacks.”

Between January and June 2014, there have been 1,564 deaths and 3,289 injuries among civilians, according to the United Nations Assistance Mission in Afghanistan.