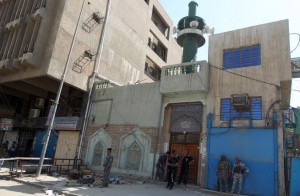 In addition to the 14 killed, at least 26 others were also wounded.

Sectarian tensions have escalated dramatically over the past year in Iraq in part due to the neighboring conflict in Syria, but also due to the fact that many Sunnis feel marginalized politically and economically under the Shiite-majority government.