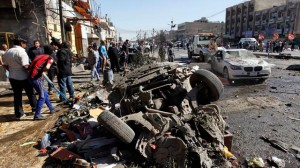 Car bombs have hit several mostly Shia neighbourhoods of the Iraqi capital and other areas across the country, killing at least 24 people and wounding dozens, officials said.

Wednesday’s attacks are the latest bout of violence ahead of the country’s first parliament elections since the 2011 US troop withdrawal.

The explosions also coincided with the anniversary of the 2003 fall of Baghdad in the hands of US troops.

The deadliest of the day’s attacks took place in the town of Numaniyah, about 80km south of Baghdad, where a bomb first went off in a busy commercial area, followed by a car bomb that exploded as people gathered to help the victims from the first blast. In all, five people were killed and 17 were wounded, police said.

Earlier in the day, a car bomb in Baghdad’s central Nidhal Street killed four people and wounded 11, while three people died and nine were wounded in a car bombing in the northern Kazimiyah district, the AP news agency reported.

Violence has surged in Iraq since last year, with the country weathering its deadliest bout of violence since it pulled back from the brink of civil war in 2008.

Too dangerous to vote

Wednesday’s attacks came as Iraq is heading towards a crucial election on April 30, its first vote since the 2011 US troop pullout.

More than 9,000 candidates will vie for 328 seats in parliament but there will be no balloting in parts of the western, Sunni-dominated Anbar province engulfed in clashes between security forces and al-Qaeda-inspired fighters.

On Tuesday, the country’s Independent High Electoral Commission said those areas were too dangerous for the vote to take place.

Since late December, Anbar province has seen fierce fighting between government troops and allied tribal fighters on one side, and fighters from the Islamic State of Iraq and the Levant, an al-Qaeda spin-off group, on the other.