SAO PAULO: Brazil’s adoration of Ayrton Senna transcends sports. It’s something only someone like Pele can relate to in the country of football. 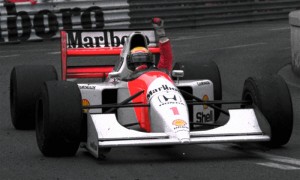 When hundreds of thousands of people lined up for hours just to take a final glimpse of Senna’s body before his funeral, they were paying tribute to more than a three-time Formula One champion.

To Brazilians, Senna was more than a great sports idol.

He personified pride and patriotism.

Every time he pulled the country’s green-and-yellow flag to celebrate his victories on the track, Brazilians rejoiced back home with another triumph by the local hero succeeding abroad.

At a time when Brazil’s national team had few victories to celebrate on the football field and the country endured political and economic turmoil, it was Senna who gave Brazilians reason to cheer.

Senna’s sudden death at the San Marino Grand Prix 20 years ago did more than shock the entire country.

It dealt a blow to the pride of a generation of Brazilians who grew up waking up on Sundays expecting to hear Brazil’s national anthem after another Senna victory.

”His determination, perfectionism, sense of justice and patriotism made Ayrton a very special person to Brazilians,” said Bruno Senna, who was 10 when his uncle pasted away in a crash on May 1, 1994.

”There is this nostalgia and unforgettable memories of his great overtaking maneuvers, great races and great qualifying runs,” said Bruno, who also became a race driver and briefly drove for the same Williams team that his uncle was driving for when he died.

”But there’s also the legacy of his personality away from the track. He was successful in the sport but at the same time was able to transcend that to become an example of life principles.” What happened in the days following Senna’s death was symbolic of what he meant to the nation.

The Brazilian government immediately declared three days of mourning and said it would give Senna the same honor as heads of states.

In a decisive football match just after news of his death started spreading, nearly 60,000 fans left their teams’ rivalry behind and started chanting, ”Ole, ole, ole, ole, Senna, Senna.” The tribute came even though Senna was an avid Corinthians fan and the teams playing that afternoon were Palmeiras and Sao Paulo.

When his body arrived from Italy, authorities estimated that more than a million people lined the streets of Sao Paulo to bid farewell as Senna’s coffin was transported atop a firefighter’s truck, draped with the Brazilian flag.

Television channels were broadcasting live as fans sobbed, waved flags and tossed flowers as the truck went by.

During Senna’s memorial services, more than 200,000 people stood in line for hours just to spend about 10 seconds in front of the coffin for a last tribute.

About 250,000 people followed the funeral procession that took Senna’s body to a cemetery, where his coffin was carried by fellow drivers Ruben Barrichello, Gerhard Berger, Damon Hill, Alain Prost, Emerson Fittipaldi and Jackie Stewart, among others.

A Brazilian sports channel will mark the 20th anniversary of Senna’s death on Thursday by airing nine of his greatest races, including his impressive second-place finish with a Toleman on the rain at the 1984 Monaco GP.

The first victory, with a Lotus at the 1985 Portuguese GP, will also be broadcast, as well as his title-clinching race with McLaren at the 1998 Japanese GP.

Senna’s first victory at home, in 1991, was just as special to Senna as it was to Brazilian fans who packed the Interlagos track year after year to see their idol.

Senna had come close to triumph at the Brazilian GP several times and finally came through after overcoming a faulty gearbox late in the race.

Fans invaded the track and swarmed Senna’s McLaren to celebrate.

The first time Senna used the Brazilian flag to celebrate inside his car was at the 1986 US GP in Detroit.

He stopped after crossing the finish line and asked a steward to give him the flag from a fan.

The gesture was especially meaningful because it happened the day after Brazil’s national team lost to France in the quarterfinals of the World Cup in Mexico.

As Brazilians were grieving yet another football defeat, it was Senna who came in to help ease their disappointment. It was something that happened many times after that.

Brazil went without a World Cup from 1970 until after shortly Senna’s death in 1994.

When Brazil failed on the field, it was Senna and his trademark celebration who gave Brazilians a reason to be proud.

No wonder Senna remains on par with Pele when Brazilians talk about the country’s greatest sports idols of all time.