A team of US and Chinese researchers has revealed a tint implantable battery they have used to power a pacemaker. It converts the constant movement of organs such as the heart, lungs and 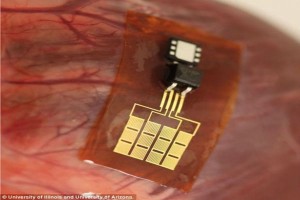 The thin, flexible mechanical energy harvester has been tested on cows – and found to produce enough power to run a pacemaker

It the future, they say, it could be used to power a range of gadgets. The tiny piezoelectric power plants are comprised of lead zirconate titanate nanoribbons, housed in biocompatible plastic.

How It Works: The small strip converts the constant movement of organs such as the heart, lungs and diaphragm into energy. The tiny piezoelectric power plants are comprised of lead zirconate titanate nanoribbons, housed in biocompatible plastic. There’s also an integrated rectifier that converts the electric signal and a tiny rechargeable battery, all encased in the same plastic. To produce more power, multiple units could be placed on an organ, the team believe.

‘Means for harvesting power directly from natural processes of the body represent attractive alternatives for these and future types of biomedical devices.

‘Here we demonstrate a complete, flexible, and integrated system that is capable of harvesting and storing energy from the natural contractile and relaxation motions of the heart, lung, and diaphragm at levels that meet requirements for practical applications.’