No progress has been made in Berlin talks on establishing a ceasefire between government and rebel forces in the east of Ukraine, Russia’s foreign minister Sergey Lavrov said. 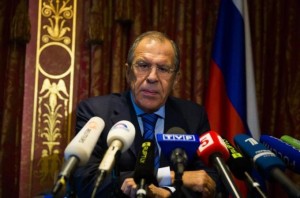 Following the talks between Russia, Germany, France and Ukraine on Sunday, Lavrov said all issues related to sending a humanitarian convoy to Ukraine have been resolved.

“One place where we cannot report positive results is in, first and foremost, establishing a ceasefire and [starting] a political process,” Lavrov told a Berlin press conference that was carried live by Russian state television.

Talks concluded with an agreement for the sides to meet again and continue trying to deescalate the worst East-West crisis since the Cold War.

Lavrov accused Kiev’s new pro-European leaders of continually changing demands over what it would take to establish a truce in more than four months of fighting with pro-Russia separatists that has claimed more than 2,000 lives.

“Our Ukrainian counterparts, unfortunately, continue setting conditions – and rather vague ones at that – including, as they say, the establishment of an impenetrable border,” Lavrov noted.

Kiev and its Western allies accuse the Kremlin of shelling Ukrainian positions at the border in order to help the rebels have open access to deliveries of Russian fighters and arms.

Lavrov again denied Moscow is helping the rebels and defended the military build-up on Russia’s border.