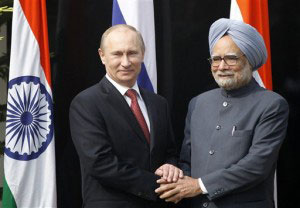 Putin and Indian Prime Minister Manmohan Singh hailed cooperation between their countries as officials signed a $1.6 billion deal for India to purchase 42 Sukhoi Su-30 fighter jets and a $1.3 billion contract for the delivery of 71 Mil Mi-17 military helicopters.

Singh said the talks included discussions on the security situation in the region, including Afghanistan.

“India and Russia share the objective of a stable, united, democratic and prosperous Afghanistan, free from extremism,” Singh told reporters after the talks.

While the volume of Russian-Indian trade has risen six-fold since 2000 and is expected to reach $10 billion this year, the growth has slowed in recent years. And even though India remains the No 1 customer for Russia’s arms industries, Moscow has recently lost several multibillion-dollar contracts to Western weapons makers.

Russia and India have shared close ties since the Cold War, when Moscow was a key ally and the principal arms supplier to New Delhi.

The ties slackened after the collapse of the Soviet Union, but grew stronger again after Putin came to power in 2000, seeking to revive Moscow’s global clout and restore ties with old allies.

Russia has maintained its strong positions in the Indian market with $30 billion worth of arms contracts with India signed in 2000-2010 that envisaged supplies of hundreds of fighter jets, missiles, tanks and other weapons, a large part of which were license-produced in India.

The countries have cooperated on building an advanced fighter plane and a new transport aircraft and have jointly developed a supersonic cruise missile for the Indian Navy.

But the military cooperation has hit snags in recent years, as New Delhi shops increasingly for Western weapons. The Indians also haven’t been always happy with the quality of Russian weapons and their rising prices. In one notable example, in 2004 Russia signed a $1 billion contract to refurbish a Soviet-built aircraft carrier for the Indian Navy. While the deal called for the ship to be commissioned in 2008, it is still in a Russian shipyard and the contract price has reportedly soared to $2.3 billion.

India has also demanded that Russia pay fines for failing to meet terms under a 2006 contract for building three frigates for its navy, the third of which is yet to be commissioned.