On Saturday 1 March over 150 local residents braved the weather to show their frustration with the train services on the Inner West Line since the introduction of the new timetable in October last year.  Mrs Perry commented that “the large turnout today shows the snowballing discontent within our 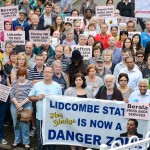 At the recent transport forums at Berala Public School and Lidcombe Public School the attendees agreed that there would be a Month of Action commencing with a launch at Berala Station on the 1st of March in order to agitate for change and educate the O’Farrell Government on the impact of these cuts to services.

Mrs Perry said, “Residents from Regents Park, Berala, Sefton, Birrong and Chester Hill have been hit the hardest by these changes that they were not consulted about.  Since the timetable changes, residents are now catching 3 to 4 trains to get to school, work, doctor’s appointments and visiting family and friends when previously they only caught 1 train.  The community feels that they are being taken for granted and have been treated badly by the changes to the Inner West Line.  This is unacceptable.”

At the rally on Saturday the community asked that Barbara Perry invite Premier O’Farrell and Gladys Berejiklian, Minister for Transport, to face the community and explain why services have been stripped from the Inner West Line which provides for Sefton, Berala, Birrong, Regents Park and Chester Hill residents.  In addition to this, one of the biggest concerns is that because commuters are now forced to change trains at Lidcombe this has created major safety issues due to overcrowding on the platforms.

Mrs Perry commented that “every person here today is saying that using public transport under this Government has become highly frustrating and stressful.  It is nothing short of a battle to get to work and school.  It’s one thing to look at the cuts on paper, it’s another thing to really hear about its impact on everyday people who just want to go about their everyday lives without battling the transport system”.

The Restore Inner West campaign – coordinated by Roy Ng and John Kyriazis, has been highly successful at gaining wide community support and it is great to be working with them to try and get the Government to listen to our community’s concerns about train services and safety on our suburban train stations.

“We can be cynical about these types of campaigns but unless we are prepared to stand up and voice not only our concerns but our dissatisfaction then we won’t see any change” said Mrs Perry.

Auburn Councillors George Campbell, Irene Simms and Tony Oldfield have also put their support behind this campaign and were all at the rally in the rain on Saturday to launch the month of action.

During this month of action it is important to get as many people involved in this campaign and if you want to be part of it please call Barbara Perry’s office (9644 6972) for and visit www.bit.ly/RestoreInnerWestLine