NEW DELHI: Rahul Gandhi, the heir to the dynasty that leads ruling Congress party, on Tuesday compared opposition leader Narendra Modi to Adolf Hitler – his sharpest attack yet on a rival who is forecast to beat him in an upcoming general election. 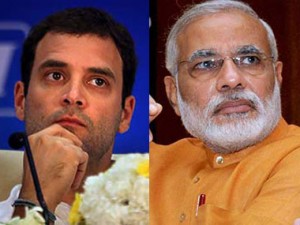 polls as the most popular choice to head the next government.

He has electrified the campaign with promises of getting India out of its economic downturn and creating jobs for its burgeoning young population.

But Modi’s rivals say the chief minister of the Gujarat is an autocrat who failed to stop religious riots in his state in 2002, in which more than 1,000 people, mostly Muslims, were killed. He has denied wrongdoing and the Supreme Court did not find enough evidence to prosecute him.

In a speech in Gujarat, Gandhi criticised the Hindu nationalist’s development record and contrasted him with the type of leader who had founded modern India.

There is another type of leader,” Gandhi said, after describing independence hero Mahatma Gandhi.The biggest example is Hitler. Hitler, who believed that there was no need to learn from the people and who thought whatever happened in Germany was done by Hitler and that the people had nothing to do with it.

The Congress party has lost popularity after a decade in power marred by corruption. In recent weeks a string of leaders have compared Modi’s rise to the emergence of fascism in Europe.

These are the dialogues of the 1970s. They have no relevance in 2014,” said Ravi Shankar Prasad, a senior BJP leader, in response to Gandhi’s references to Hitler.

Arvind Kejriwal, the leader of the anti-corruption Aam Aadmi Party and a Modi opponent, tore into his economic model while in Gujarat last week.

India’s election is due to start on April 7 and voting will span five weeks. The world’s largest democracy has 814 million registered voters, according to the election commission.

Opinion polls predict that the BJP will win the biggest single chunk of votes, but will still fall short of the 272 seats needed for a majority in the 543-seat parliament.

Modi has presided over a period of rapid economic growth in Gujarat and has slashed red tape to attract companies such as Ford Maruti Suzuki and Tata Motors.