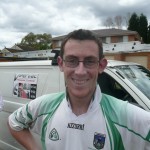 Commissioner Stowe today released photographs of the two Irish tourists, who have been served by Fair Trading with court attendance notices this month after they allegedly contracted to do pressure cleaning and driveway resealing work without an appropriate home building licence.

One of the pair was also allegedly in breach of the Australian Consumer Law for negotiating an unsolicited consumer agreement with a consumer without providing proper paperwork and accepting payment within the ten day cooling off period.

On 15 January, a call was received by the Travelling Conmen Hotline reporting two Irish men who approached a resident in Castle Hill offering a good deal to pressure clean and reseal his driveway.

The men told the resident they had leftover driveway sealant they had to use. This is the typical modus operandi of travelling conmen. The resident reported that the men were also doing work on his neighbour’s property, re-bedding pavers on the driveway and walkway.

They reportedly offered an eight year guarantee on their work. Their business is not registered. They also told the resident that they had insurance, but offered no proof.

The work they were touting for and undertook requires a home building licence for jobs valued at more then $1,000.

The men are due to appear at Parramatta Local Court on 8 February 2013.

Visit the Stop Travelling Conmen Facebook page at http://www.facebook.com/StopTravellingConMen  and check the interactive map for reports of travelling conmen at www.stoptravellingconmen.org.