Thousands of protesters return to the streets of central Bangkok to revive campaign for Thai government to yield power. 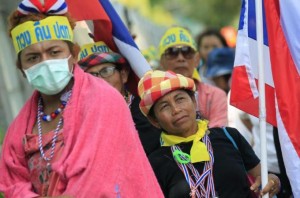 Thousands of anti-government protesters have returned to the streets of Bangkok, reviving their whistle-blowing, traffic-blocking campaign to force the resignation of the country’s prime minister.

They have reiterated demands for Yingluck Shinawatra’s elected government to yield power to an interim appointed council that would introduce vaguely defined anti-corruption reforms.

Saturday’s march comes after a lull in anti-government street rallies that started about five months ago, amid growing concern of violence between supporters and opponents of Yingluck, who has refused to step down.

Yingluck’s government has come under growing threats of legal action that could force it from office.

The court said on Friday that the vote did not take place on the same day across the country and that violated a clause in the constitution.

A court spokesman told reporters that judges voted 6-3, according to the AFP news agency. It was unclear when a new vote would be held.

The government faces a slew of legal challenges and has withstood calls to resign despite the protests, which have shut government offices and at times blocked major thoroughfares in Bangkok to try to force Yingluck out.

Hundreds of people have been injured in the violence and 23 have died.