A group of protesters is camped outside the Villawood detention centre in Sydney’s west in a bid to try and stop the transfer of more asylum seekers to Western Australia. 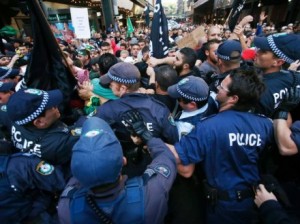 Activist Clo Schofield says the group gathered after hearing buses had been brought in to the centre.

“There’s two coaches inside the centre, the same coaches that were used on standby,” she said.

“There are five riot cops on standby … so we decided to camp out overnight to ensure they would have the maximum opportunity to disrupt this move by the Department of Immigration and Border Protection.”

Ms Schofield says the asylum seekers are being removed from their social and legal support networks “in a deliberate attempt to isolate the detainees and avoid public scrutiny of the conditions”.

Villawood officials say the transfer is taking place in preparation for refurbishments.

The ABC understands some of the asylum seekers are involved in legal action against the government over the accidental publication of personal details on the Immigration Department’s website earlier this year.