PREMIER Mike Baird will put to MPs next week a 49 per cent sale of the state’s $30 billion electricity poles and wires on a 99-year-lease to pay for infrastructure to turbocharge NSW.

The policy, to be taken to the next election, will be presented to both Liberal and National party rooms and to a joint party room on Tuesday morning in special “pre-Budget meetings” a week out from the state Budget. 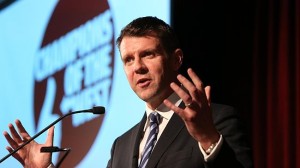 The proposal will also include guarantees that prices will not rise, and job-guarantees for electricity workers.

There will also be an “infrastructure plan” to show how the proceeds will be used to cut congestion problems in Sydney and around the state.

A government source described the meetings as Mr Baird “pressing the go button” on a sale of the networks.

“Both meetings are at the Premier’s suggestion. He thinks it’s time to get this decision along,” a senior government source said.

“It’s relevant to the Budget because that decision does have implications in terms of the AAA (credit rating).

“It’s going to be an infrastructure plan that turbo charges productivity in terms of fixing some of the bottlenecks and congestion problems.”

The Telstra-style half sale would contribute $15 billion-plus to pay for infrastructure.

Selling only half — as opposed to all of the assets — would guard against a prospect the equity market might not be able to cope with all of it being sold at once. It would also soothe community fears.

Projects linked to a sale include a second Harbour rail crossing and an M9 tollway to link south-western Sydney to the city’s northwest via the base of the Blue Mountains.

Mr Baird has said the West Connex Motorway might be finished ahead of schedule if the assets were sold.

The Daily Telegraph revealed on Monday that the sale would be in the Budget papers.

It is understood the Budget will also show that, without a sale, infrastructure spending will not be able to increase and may even have to slow.

The Daily Telegraph report is said to have set off some ­National Party MPs, who are opposed to a sale.

A vote to sell the electricity generators two years ago only just passed the National Party room by one vote.

The party room meetings will come just a couple of days before the National Party state conference.

Mr Baird, when asked about the sale last week, promised the government would take to the election a “very positive plan for this state” that ­“touches every portfolio”.

An exclusive Galaxy Daily Telegraph poll of 815 voters taken last week found 35 per cent of people support the sell-off to be used for infrastructure projects, 47 per cent were ­opposed and 18 per cent ­remained uncommitted.

Of Coalition supporters, 50 per cent supported the move, 33 were opposed and 17 per cent uncommitted.

“You’ll always have people opposed to any change”, Mr Baird said last week. He pointed towards successful long-term leases of ports, generators and desalination plant as a “well received” policy which had seen billions flow to projects such as the West Connex and Pacific Highway upgrade.

Deputy Premier Andrew Stoner is understood to have also sought a commitment from Mr Baird to fund regional projects with one third of the proceeds of any sale.