POLISH prosecutors have opened a criminal investigation into a plane crash that killed 11 people – parachuting instructors and students and the pilot of the plane. 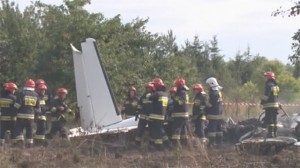 THE Piper Navajo plane was carrying 12 people when it crashed and burst into flames in an orchard on Saturday just minutes after taking off from Rudniki Airport in southern Poland.

One person was also injured.

Identities of nine of the victims are pending DNA testing.

Tomasz Ozimek, a spokesman for the prosecutor in Czestochowa, said on Sunday the criminal investigation aimed to determine whether foul play was involved in the crash.

Ozimek said investigators were also looking at possible plane malfunction, human error or irregularities in the organisation of the training flight.