Philippine troops are closing in on Muslim rebel positions and cutting off escape routes to end a week-long standoff that has left more dozens dead in the southern city of Zamboanga, officials say. 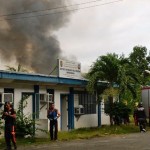 Day and night operations by at least 3,000 elite government troops have now seen 51 fighters killed, with another 48 captured or apprehended, according to official government figures.

On the government side, at least six soldiers have been killed with another 79 wounded. Civilian casualties stand at four, with another 24 wounded.

The government figures also suggest 51 hostages have so far been released or have escaped.

“Fighting is continuing as we speak. They continue to resist and conduct offensive actions against us.”

Heavily armed MNLF forces entered the port city’s coastal neighbourhoods last Monday and took dozens of hostages in a bid to scupper peace talks between another rebel group and the government aimed at ending a decades-long rebellion in the south.

But Zagala said the fighting was concentrated in two coastal districts, while other areas were now secure.

Al Jazeera’s Jamela Alindogan, reporting from Zamboanga, said: “Up to now, the details on the ground remain sketchy.”

“There are text messages, peace observers have shown to me, from a hostage who said that the military has been directly or indirectly hitting civilians and hostages in between,” she said.

“What we know is, there are some 180 MLNF fighters and unknown number of hostages in the area, while human rights observers are trying to at least have a chance to get in and offer aid and medical assistance to the affected.”

Air and sea ports remained closed on Sunday in a crisis that has paralysed the city of one million, seen entire neighbourhoods razed to the ground, and forced tens of thousands to flee.

The MNLF waged a 25-year guerrilla war for independence before signing a peace treaty in 1996 that granted limited self-rule to the south’s Muslim minority.

Misuari, who has accused the government of violating the terms of a 1996 treaty by negotiating a separate deal with a rival faction, had disappeared from public view shortly before the fighting began on Monday.