At least 130 people were killed in a wave of simultaneous attacks on Friday evening in Paris, in the deadliest violence to strike France since World War II.

Gunmen and bombers attacked busy restaurants, bars and a concert hall at six locations across Paris on Friday evening, killing scores of people in what a shaken President François Hollande described as an unprecedented terrorist attack.

France declared a state of emergency and secured its borders after attackers unleashed a coordinated wave of explosions, gunfire and hostage-taking in Paris that generated scenes of horror and carnage.

Dozens have been killed at a restaurant in the city’s 10th Administrative District, or arrondissement; a soccer stadium; and the nightclub Bataclan, where an unknown number have been held hostage.

The first attack was a shooting outside the Le Petit Cambodge restaurant, after which gunfire was reported at two other locations in the 11th arrondissement area.

More than 100 people were also taken hostage during a heavy metal concert in the Bataclan concert hall, with on-the-scene reports suggesting that around 50 were released alive, but not before as many as 118 were killed inside the venue.

“Terrorist attacks of an unprecedented magnitude are in play in Paris. It’s horror,” Hollande said. “We have mobilized all forces possible to neutralize the terrorist.”

Early Saturday, he declared: “For all those who’ve seen these atrocities, rest assured – we want to say that we will bring the fight against terrorism and will be without pity because when terrorists are capable of such atrocities, it will certainly be faced with a determined France, a united France.”

Terrorists launched a total of six coordinated attacks at high-profile sites across Paris:

• Two suicide bomb attacks at a bar near the Stade de France led to President Hollande being evacuated from the stadium. He has since declared a national state of emergency.

• Two terrorists with AK47s burst into the Bataclan concert hall, where rock band Eagles of Death Metal were performing. They sprayed bullets and threw grenades into thousands of people before they started slaughtering people one by one.

• A terrorist armed with an AK47 killed at least 11 people at Cambodian restaurant Le Petit Cambodge in the Bastille area on Rue Bichat.

• Gunfire and bomb blasts have also been reported at the Louvre art gallery, the Pompidou Centre and Les Halles shopping centre. 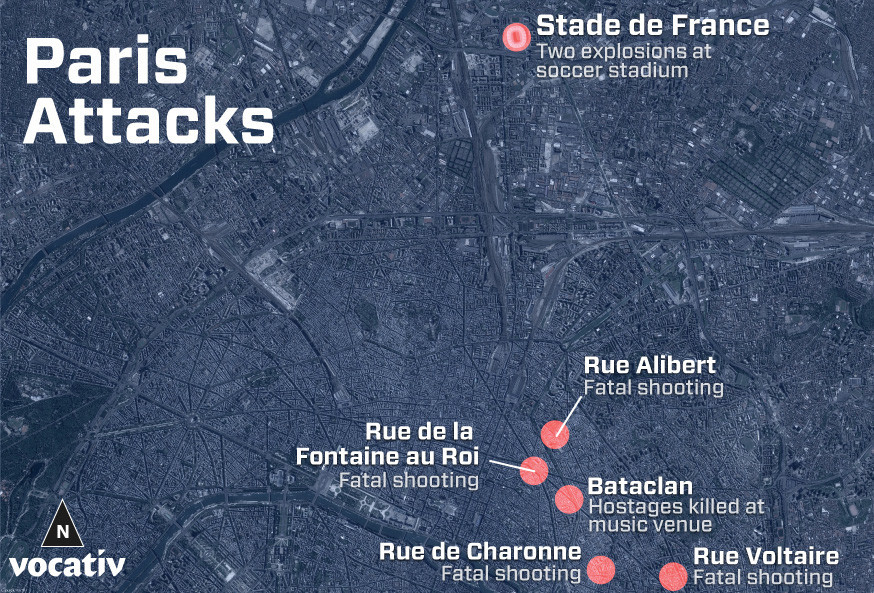