Dozens of dead bodies remain under the rubble in Rafah, as Israel’s assault on southern Gaza kills scores of civilians.

Rafah, Gaza Strip – Under continued Israeli air strikes and artillery fire, Issa Akel has no other choice: The 50-year-old bulldozer driver must stop unearthing the dead bodies buried beneath the rubble in this southern Gaza town and seek safety for himself. 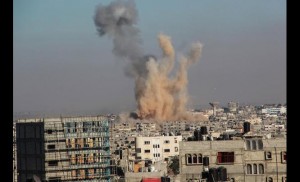 In Hay al-Junina, east of Rafah, Akel went on a mission to rescue the dead, but he soon realised that his life was in danger. On Saturday, the town’s roads were littered with dead bodies, left bleeding for hours without any ambulance crew arriving to rescue them.

“We are now unable to dig out bodies of people from under the ground,” Subhi Radwan, the mayor of Rafah, told Agency. He explained that his office receives hundreds of calls for help, but the municipality’s trucks can’t access most areas.

Local medics said that at least 110 people have been killed in Rafah in the past 24 hours, while hundreds more have been injured. At least 1,680 Palestinians have been killed and 8,500 others hurt in Gaza since Israel’s military offensive began on July 8.

The killings in Rafah occurred just two hours after an internationally brokered, 72-hour humanitarian ceasefire between Hamas and Israel came into effect. Israel blamed Hamas for shattering the truce, while the Palestinian group said Israeli troops used the short-lived deal to storm into Rafah and kill residents.

Meanwhile, Ashraf al-Qedra of Gaza’s health ministry has appealed to international groups to ensure that ambulances have a secure route to evacuate victims to the nearby town of Khan Younes.

With nowhere safe left to take the dead, people in Rafah have begun storing the bodies of their loved-ones in refrigerators usually used to store food items. News Reporters saw dozens of bodies stuffed into one such refrigerator.

Nearly half the city was under Israeli bombardment on Saturday, making it difficult to arrange proper burials. “Injured people [are] calling us … but we can’t get to them,” said a local ambulance driver. “No one is safe, ambulance crew, municipality workers, and civilians in their homes, are hit,” Mayor Radwan said.

The crisis in Rafah has resulted in a lack of electricity, water, and sanitation services. “We are receiving hundreds of phone calls from people who have no water and they can’t move under constant artillery shelling,” said Radwan, explaining that between 30,000-40,000 people have been left without drinking water in the eastern part of the city.

The violence has also created thousands of new internally displaced persons , according to the United Nations, including many who have sought shelter in overcrowded UN schools. At least 280,000 Palestinians across Gaza have now been displaced.

The UN estimates that 76 families have lost three or more members in the same in incident, totalling over 400 deaths.

Radwan said he had never seen a war like this in his 62 years, more than half of which has been spent working in public services in Rafah. “In the past I have dealt with [the] Egyptian and Israeli military,” he said, “but it has never reached [this] level of no consideration for the humanitarian crisis”.