Mahmoud Abbas signs request to join several UN agencies in move that could derail US bid to salvage peace talks. 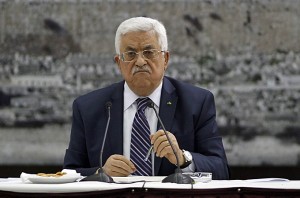 Mahmoud Abbas, the Palestinian president, has signed a request to join several UN agencies in a move that could derail a US push to revive faltering peace talks with Israel.

“The Palestinian leadership has unanimously approved a decision to seek membership of 15 UN agencies and international treaties, beginning with the Fourth Geneva Convention,” Abbas said on television on Tuesday after signing the demand during a meeting at his Ramallah headquarters in the West Bank.

“The demands [for membership] will be sent immediately” to the relevant agencies, he said.

“This is not a move against America, or any other party – it is our right, and we agreed to suspend it for nine months,” said Abbas.

“Going to the UN means the potential of going for an independent state and of turning to the International Criminal Court.”

“It ups the pressure on the US and on Israel, something they [Palestinians] have always threatened. During the nine months of talks Palestinian President Mahmoud Abbas said they would not do this. But they were promised nine times the release of this last batch of prisoners.”

“Abbas feels he has no other choice. He is in a difficult position among the Palestinians: The settlements have doubled; home demolitions of Palestinians have doubled – and it is difficult for him to justify the talks without seeing results,” said our correspondent.

The Palestinians agreed to refrain from seeking membership of international bodies and from pursuing legal action against Israel during the nine months of talks that US Secretary of State John Kerry launched in July.

But Israel has refused to release the final batch of 26 prisoners, using it as a bargaining chip to try and extend talks beyond their April 29 deadline.

The Palestinians have also repeatedly threatened to resume their action through international courts and the UN over Israel’s settlement expansion on occupied territory in the West Bank and in annexed Arab east Jerusalem.

Israel on Tuesday reissued tenders for hundreds of settler homes in the east Jerusalem settlement neighbourhood of Gilo, on top of the thousands of new homes it has announced since July.

Prior to Abbas’ announcement, Kerry had been due back in the region for a meeting with the Palestinian president on Wednesday, after a whirlwind visit on Monday and Tuesday.