Despite the challenges of running a business from a refugee camp, many Palestinians are doing so out of necessity.

Shatila refugee camp, Beirut – Thirteen years ago, Shatila resident Mohammed Diwan was among the many unemployed Palestinian refugees seeking a way to support his family.

A former employee of the Palestine Red Crescent Society, Diwan convinced his broth 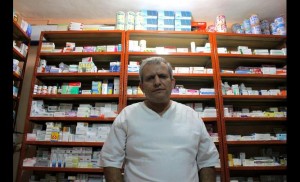 er-in-law to provide him with a loan so he could open a pharmacy in Shatila refugee camp, located on the southern periphery of the Lebanese capital of Beirut.

“At that time, there weren’t many pharmacies that carried the type of medicines I had in the camp, so the business plan seemed perfect,” Diwan tells media from the makeshift store inside his family’s living room.

Today, he tends to a customer seeking treatment for a small oil burn; Diwan prescribes an ointment, but the customer leaves empty-handed. “Most of the residents of the camp can’t afford the proper medicine they need,” he explains. “I didn’t recognise that last customer, otherwise I would’ve let them take the medicine on credit.”

While Diwan says business in Shatila has always been difficult, his ledger reveals that paying customers have been particularly scarce as of late. “My customers pay me back when they can,” he says. “Obviously it’s not my preferred way of conducting business, but it’s my only option here in the camp.”

Mired by decades of exclusionary legislation, Palestinians are currently banned from owning property and from working in over 30 professions in Lebanon – down from a previous 73. Lebanon’s Palestinians also face informal discrimination by potential employers, who often seek to exploit them by offering lower wages and no job security.

“As a Palestinian raised in Lebanon, you’re taught not to have any dreams as a child,” Mohammed Deeb tells media from inside his spice shop, originally opened by his grandfather in 1949. “I’m now 33 years old and I’ve been selling spices for 17 years. Spices are all I can dream about; my only hope is that one day my daughter will be able to have real dreams.”

Sari Hanafi, a Beirut academic with expertise on the political economy of Palestinian refugees in Lebanon, says Palestinians have been excluded from any legal rights as labourers since they first arrived in Lebanon more than six decades ago. “Since 1948, Palestinians have never received real regulations for their work,” Hanafi told media. “They have essentially worked in a black market.”

Tareq Osman, a loan analyst in Shatila for Ibdaa, a non-profit microfinance initiative of the Arab Gulf Fund for Development, predicts many challenges ahead for Palestinian businesses owners in Shatila. “I’ve already started witnessing a slight increase of late payments on loans from some of my best clients,” Osman told media.

“While I can’t say what the exact reason is, there has definitely been an increase of competition among businesses with the influx of Syrian businesses in the camp.”

Since the beginning of the Syrian crisis in 2011, experts say the population of the Shatila camp has swelled from approximately 10,000 to more than 22,000. Economic growth in Lebanon has slowed, private investment has been reduced, the trade deficit has increased, and the real-estate and tourism industries have declined, the ILO found. Amid this backdrop, the economic outlook for Shatila’s entrepreneurs is bleak, Hanafi said.

“The current government has continually used the Syrian crisis to block improvements to the conditions of Palestinians,” he said. “The excuse has been used over and over again for the last three years.”

Meanwhile, prominent Lebanese figures such as Walid Jumblatt, leader of the Progressive Socialist Party, continue to advocate for greater social rights for Palestinians – including the right to own property. Lebanese NGOs and policymakers have started talking about granting Palestinians citizenship and access to the National Social Security Fund (NSSF).

Palestinians currently contribute to the NSSF without receiving any benefits, but Lebanese lawmakers are at odds over whether to grant them access to the beleaguered programme. Both Palestinian and Lebanese factions, however, oppose a path to citizenship for Palestinians. Lebanese citizenship would mean that Palestinians have essentially given up their sacred right of return to their homes in what is now Israel.

Diwan, the Shatila pharmacy owner, says he no longer pays attention to news of potential reforms; he has heard the same promises all too often in the past. Instead, he narrows his focus to the needs of the patients who find their way into his living room.