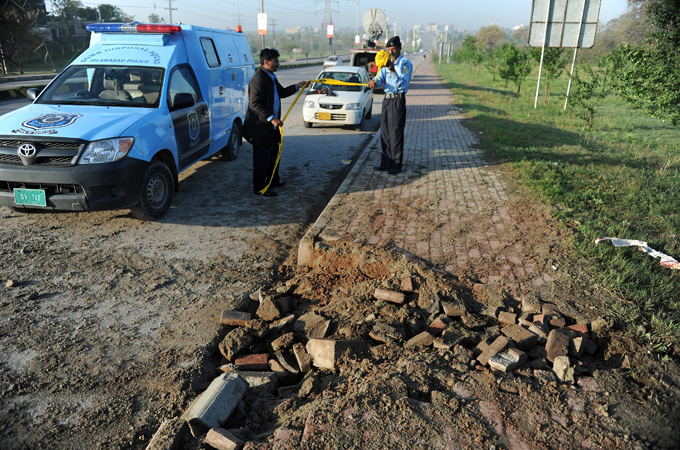 Pakistan’s former military ruler Pervez Musharraf, who is on trial for treason, narrowly escaped an assassination attempt as a bomb went off shortly before his convoy was due to pass, police said.

The bomb was planted as the convoy travelled from an army hospital where Musharraf has been staying since January to his home, on the outskirts of Islamabad early on Thursday.

Nobody was injured and there have been no claims of responsibility so far.

“Four kilograms of explosive device planted in a pipeline under a bridge exploded around 20 minutes before the former president was supposed to cross the spot,” senior police official Liaqat Niazi said.

He said Musharraf was taken home via an alternative route.

Muhammad Naeem, a spokesman for the Islamabad police, confirmed the incident, saying a bomb disposal squad had cleared the area after the blast.

“Nobody was injured in the blast,” he said, adding that Musharraf was the intended target.

Musharraf was moving back to his farmhouse after being discharged from a cardiac unit in a Rawalpindi hospital where he has spent the past three months.

It was the fourth known attempt on the ex-general’s life.

The Taliban has vowed to send a squad of suicide bombers to kill him, and security threats have prevented him from appearing at all but two of his treason hearings.

Musharraf’s spokeswoman, Aasia Ishaq, said Musharraf was fine and reached his home safely but that it was up to the authorities to make sure nothing happened to him.

“All extremist and terrorist forces want to kill Musharraf,” said Ishaq. “If anything happens to Musharraf, the government will be responsible.”

During the courtroom trial last Monday, Musharraf’s lawyers asked the court to authorise travel to the US for medical treatment which the court refused, saying it was up to the government to decide if he could leave the country.

On Wednesday night the government refused to take Musharraf off the exit control list, ending speculation that he may be allowed to leave the country.

Musharraf, who led Pakistan from 1999 to 2008, returned from self-imposed exile in Dubai in March last year to stand in general elections but was barred from taking part and has since faced a string of legal cases including treason.