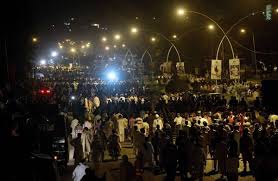 Islamabad, the overseas Pakistanis are condemning the brutal act of Pakistani law enforcement agencies against the non-violent protesters sitting for the last 2 weeks in the Capital Islamabad protesting cruel and corrupt acts of the present government of Pakistan. The red zone of Islamabad where national parliament, federal secretariat, Prime Minister & President Houses and many foreign embassies are situated has been turned into a battlefield between thousands of protesters of independence & revolution marchers and law enforcement personnel.

As thousands of protesters of Pakistani Awami Tehreek (Pakistan National Movement) led by Dr. Qadri-ul-Qadri and Pakistan Tehreek-e-Insaf (Pakistan Justice Movement) led by Imran Khan moved in 17th day of sit-in protest, are now marching towards Prime Minister House over 10,000 personnel of Punjab Police and hundreds of personnel of Federal Police attacked protesters with batons, heavy tear gas shelling, and rubber bullets. According to the latest reports coming from Pakistani media 7 people have been dead and over 200 seriously injured, however, as the hundreds and thousands of heavily equipped Police personnel are viciously and continuously attacking on protesters to clean them up from their sit-in, there is great danger of mass killings in the capital.

Pakistanis in Australia have shown their deep anxiety and fear on the bloody Police operation on the protesters who have been sitting-in and protesting non-violently and unarmed for the past 15 days. The 24-hour live coverage of Pakistani satellite Televisions is an open evidence of barbaric acts of the deployed police personnel who have attacked the members of the protesters (men & women) indiscriminately and even on media crew (reporters, cameramen etc) with batons and heavy tear gas shelling. In this regard, the Pakistani Community members in Sydney are contacting their local councillors, parliamentarians and community leaders to hold a formal protest to the Australian Government against the Prime Minister of Pakistan, Mr. Nawaz Sharif and his brother Shahbaz Sharif the Chief Minister of state of Punjab.

The prominent members of the Pakistani community in Sydney contacted Tribune International, and shown their great fear that if this bloody operation by the Police continues there is chance of mass bloodshed in the capital of Pakistan. Australian Pakistanis have appealed to the Australian Government, civil society and human rights organisations to force current government of Pakistan to immediately stop the bloody action against non-violent Protestants as political protest by the citizens are their basic right of democracy.

Syed Atiq ul Hassan, a prominent community leader and a journalist, have asked all the members of Pakistani Community to jointly lodge a petition against the government of Pakistan on the bloodshed of innocent Pakistanis in the capital by the police personnel. He said, a joint peaceful rally will be staged soon in Sydney against the brutal act of the Pakistani government.