Peshawar, Pakistan – A major Taliban faction in Pakistan’s tribal North Waziristan region has revoked a peace accord with the government, accusing it of violating an agreement after more than 100 rebel fighters were killed in a military offensive. 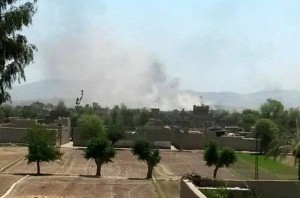 Last week, Hafiz Gul Bahadar announced they would take up arms after June 10 to defend the region against any planned military intervention. The Taliban also asked locals Wazir tribes to either join their ranks or migrate to the neighbouring Afghanistan.

“The Shura Mujahideen has now decided not to tolerate this aggression any more and has opted to fight and defend Waziristan,” an Urdu language pamphlet distributed in parts of the tribal agency said.

The pamphlet also warned the local tribesmen to sever ties with the government and military officials by June 10 or else action would be taken against those violating the orders.

The group has also asked its splinter groups to focus on defending North Waziristan rather than sending mercenaries to Afghanistan to fight against the US troops.

The Pakistani military has conducted air raids in Mir Ali and Miranshah Tehsil of the conflict-wracked region, forcing thousands of people to flee to nearby Khyber Pakhtunkhawa province, while many have found safe haven across the border in Afghanistan’s Khost province.

“The jets destroyed Mir Ali bazaar and many buildings have been raised to ground, so we have to move out”, as he moved out to Bannu district with all his belongings stuffed in a pickup truck.

“We are not terrorists, we are commoners,” he said.

Naqeebullah from Mir Ali, who moved his family to Afghanistan, told Al Jazeera that the villages around Mir Ali such as Mosaaki, Eiderkhel, Urmaz, Esokhel, Esorit and Ipi have been vacated.

He said that about 50 vehicles were in the convoy when he moved his family to Afghanistan.

However, many people such as Hisamudin Dawar of Hamzoni Miranshah have backed the military offensive. “We support that outsiders should be flushed out, but bombing mosques, bazaars and residential areas is a great injustice,” he said.

Most people have taken refuge in their relatives’ homes instead of the government established camps due to cultural reasons.

“There is no way I can go to the camp, I would prefer to die of hunger but can’t disgrace my women in the government camps”, said Rehmat Wazir, who headed to Lakkir Marwat with his family.

Azizur Rehman, the in-charge of Alkhidmat Foundation, a charity organisation run by the religio-political party, Jamaat-i-Islami in Bannu said they have counted more than 20,000 women, children and elderly people who had left.

While the Federal Disaster Management Authority (FDMA) said that they have registered about 17,053 people who have shifted out of the region till June 2.

FDMA chief Arshad Khan told Al Jazeera that most of the people were moving to their relatives or host families in other cities of the Khyber Pakhtunkhwa such as Dera Ismail Khan, Bannu, Lakki Marwat, Dera Ismai Khan and even Punjab province.