The leaders of two Pakistani protest movements have stepped up their calls for Prime Minister Nawaz Sharif to resign, claiming that the country’s leader was elected fraudulently. 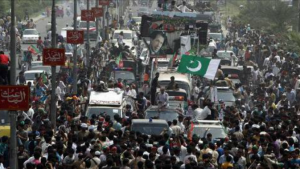 Opposition politician and former cricket player Imran Khan addressed thousands of flag-waving supporters on Saturday, vowing not to leave the rally until Sharif steps down.

“The time has arrived when the nation should decide,” Khan said. “We don’t accept a prime minister who has been appointed after rigged elections.

“I can promise you that Prime Minister Imran Khan will never lie to you. What I promise, I will do it. I will not make false promises.” 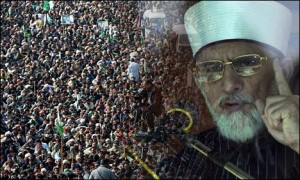 Anti-government cleric Tahir ul-Qadri, who has spearheaded a separate protest march from Lahore to the capital, also addressed the crowd calling for a “new national government” that could implement “democratic reforms”.

“Through this government, first, every person or political leader or technocrat, bureaucrat, or public officer who has engaged in corruption should be held accountable.”

He also gave the government a 48-hour deadline to resign. It was unclear what he was threatening to do if the deadline expires, but his language suggested some kind of force.

“We have come to change the system,” said Syed Saboor, a labourer and Qadri supporter.

“I have spent the last two nights sleeping on the side of the road. I will stay until the government resigns,” he said.

Sharif has only been in office for 15 months. The May 2013 general election saw him take power in a landslide, which international monitors said were free and credible.

Meanwhile, a Lahore sessions court on Saturday ordered the police to register a First Information Report against Sharif, Punjab Chief Minister Shahbaz Sharif and 19 others in connection with a shooting at a Qadri rally in June that killed at least seven people. The registration of a case in connection with that event has been one of Qadri’s key demands.

Tribune’s Syed Nabeel, reporting from Islamabad, said “three days of marches, convoys and protests through the Punjab province have culminated in this moment – both Khan and Qadri are now in Islamabad, 2km from parliament.

“They say they won’t leave until Sharif does, but with a majority in parliament, the ruling party is under no legal pressure to do so. Khan and Qadri’s supporters say they will not support any extra-constitutional measures to remove him, and so this leaves us at an impasse.”

The unrest has raised questions about Pakistan’s stability, at a time when the nation of 180 million is waging an offensive against the Pakistani Taliban.

Tribune’s reporter, who is also reporting from Islamabad, said that the protest have been “very disruptive” particularly to the economy with “billions” of rupees lost.

In Islamabad, authorities have blocked roads with shipping containers and barbed wire in an effort to control the marches, and riot police have been out in force, but there have not been any serious incidents.

Some members of Sharif’s party have suggested the protests are secretly backed by elements in the military, which has had an uneasy relationship with the prime minister.

To what extent Khan and Qadri can destabilize the government is likely to depend on the stance taken by the armed forces, which has a long history of mounting coups.

Few people fear a coup, but many officials think the threat of unrest will increase the military’s hold over the government.

The military has been frustrated with the government, in particular over the prosecution of former army chief and president Pervez Musharraf for treason.

There has been disagreement, too, between the government and the army on how to handle the Taliban.

The government insisted on peace talks but eventually the army launched an offensive.