Upon arrival in Pakistan and while talking to the media Dr. Allama Tahir ul Qadri said that he would answer to all those questions and clarify those doubts which were being raised by some political elements and journalists on his intentions for Pakistan. Then in the first few minutes of his historic speech in the historic demonstration of 2 million people at the Minar-Pakistan, Dr. Qadri made very clear through his sworn declaration that he has no intention to sabotage the current democratic process neither has he wanted to delay the coming elections. He further claimed that he has not been supported by any external or international powers for his moment to make the democratic & coming election process right. He also said that if army would intervene and try to take over power of the country he would be at the frontline to be the wall against the military forces. There has nothing been come out as well which could prove that Dr. Qadri or his Minhaj ul Quran has aim to participate in the coming election. Now what else remaining to justify the political leaders and parties sitting in power in federal and provincial governments opposing, condemning and creating conspiracy theories against Dr. Qadri’s and his large gatherings and demonstrations.

Noticeably there are leaders of two major parties, Pakistan Peoples Party (PPP) and Pakistan Muslim League Nawaz Group (PML(N), are loudly criticising Dr. Qadri’s electoral reform agenda of democratic process prior to the coming general election. It is quite obvious to understand their opposition as Dr. Qadri’s demand of electoral reform conflict the interest of the PPP and PML (N) because both parties are the major power sharer of the country- PPP is ruling in the centre and PML(N) is in Punjab (major provincial power of Pakistan) – and both want to continue their governments for the next tenure. Dr. Qadri has already unveiled that these two parties are trying to bring a care taking government which can protect their target goals of the coming elections. However, Mr. Altaf Hussain, the leader of the 3rd political force in the current government, Mutehida Quomi Movement (MQM) has demonstrated support to Dr. Qadri’s agenda of electoral reform. The MQM’s parliamentarians attended the 23rd gathering (Jalsa) of Dr. Qadri. Altaf Hussain has made a good decision in this political situation as this can provide a chance to MQM to regain support from those sections that are not happy with MQM due to Altaf Hussain’s continuous support to PPP in prolonging PPP’s government to complete 5 years tenure. Now Altaf Hussain should also ask their parliamentarians to resign and openly support Dr. Qadri’s campaign in order to force PPP and PML (N) to bring all the political stakeholders into agreement in forming a care taking government. Outside the current parliament but currently an effective political force in public, Imran Khan also announced that Dr. Qadri’s electoral reform agenda is similar to the agenda of his party Tehreek-e-Insaf. Imran Khan should also openly support Dr. Qadri’s action plan. Altaf Hussain and Imran should put their political difference aside for the time being for the sake of Pakistan and the people of Pakistan.

These political parties look for election just to win and gain power, they are professional politicians not nation-builders, they have no programme or plans for the betterment of the common people of Pakistan, even if they claim they have, in the five years they have proved themselves to be failed otherwise Pakistan would not be going through the worst situation since it was split in half in 1971, therefore, how can they make any good in the next 5 years.

The most unfortunate dilemma is that every time, from army dictator Ayub Khan, civilian leader Zulfiqar Ali Bhutto, army dictator Zia ul Haque, civilian leaders Benazir and Nawaz Sharif and then again army dictator Pervez Musharraf and now Asif Ali Zardari and his team in the government have changed the constitution of Pakistan for their own vested interest; otherwise rulers wouldn’t require making changes since the creation of the State. 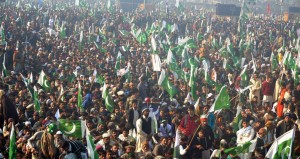 Similarly those nationalist provincial parties who are against the feudal/tribal system within Pakistani politics should also join Dr. Qadri’s campaign of electoral reform. These nationalist parties in Sindh, Balochistan and even in Khaibar Pukhtoon Khwa should understand that they could only survive and make the conditions better for their followers if Pakistan survives. Stronger Pakistan financially, administratively and politically will make provinces and provincial parties stronger.

This is the time for the 180 million people of Pakistan to eliminate the traditional politics of feudalism, monarchism and family-ism, father then son or daughter or brother or sister should be stopped now. In doing so, the people of Pakistan must force the ruling forces to make an electoral reform and conduct fair and corruption-free election in the country.