COLOMBO: Pakistan were set a target of 271 to win the second Test against Sri Lanka in Colombo on Sunday and draw the two-match series 1-1.

The hosts were bowled out for 282 in their second innings just before tea on the fourth day. 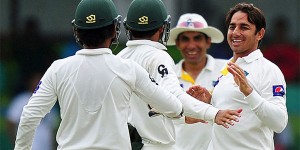 Earlier, Jayawardene was dismissed for 54 in his last Test innings, in front of 4,000 home fans at the Sinhalese Sports Club.

The overnight pair of Jayawardene and his long-time team-mate Kumar Sangakkara, batting together for the last time in a Test match, took their partnership to 107 after Sri Lanka resumed the day on 177-2.

But both batsmen fell to Ajmal within three runs of each other as the hosts slipped to 189-4 within the first 30 minutes of play.

Ajmal had the left-handed Sangakkara caught at silly point by Azhar Ali for 59 and then removed Jayawardene in his next over after the batsman had added five runs to his overnight 49.

One run earlier, Jayawardene had survived an appeal for a catch off Riaz as replays showed the ball touch the ground before landing in wicket-keeper Sarfraz Ahmed’s gloves.

The 37-year-old Jayawardene is one of only five batsmen to score more than 11,000 runs in both Test and one-day cricket — the others being Sachin Tendulkar, Ricky Ponting, Jacques Kallis and team-mate Kumar Sangakkara.

The Pakistani fielders applauded as the crowd gave the departing Jayawardene a standing ovation. The batsmen raised his bat to acknowledge the cheers before walking off.

Jayawardene began his last Test with an average of 50.02, but it dropped below the 50-mark after he was dismissed for four and 54 in the match.

Having retired from Twenty20 internationals after Sri Lanka’s title-winning campaign in the World T20 in April, Jayawardene will now play only one-day cricket heading into next year’s World Cup Down Under.

Pakistan missed left-arm seamer Junaid Khan, who did not bowl in Sri Lanka’s second innings after being hit on the helmet by a rising ball from Dhammika Prasad on Saturday. He was kept under observation at a hospital for a few hours.