By: Mahboob A. Khawaja, PhD. 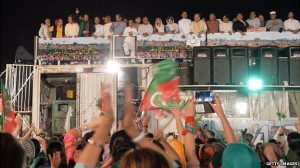 The nation’s capital is under siege for over two weeks. People want political change and justice to their grievances that is nowhere to be seen.

PM Sharif was already on a life support system of his own making. Now, the oxygen tank is fast running out of the life maintaining system. Nawaz Sharif has lost sense of direction and political maturity to see the mirror and to resign from the powerhouse gained by rigging the 2013 elections. Undoubtedly, Sharif lives in a matrix of lies. He does not have the courage to encounter a truthful statement. Informed Pakistani masses can tell the difference between the truth and a lie. The millions Freedom March to Islamabad is self-evident of this public awareness. According to the DAWN news media report of 1st September, 3 political activists were killed and 450 demonstrators wounded by the police action. In a knowledge-based 21st century age of reason and people’s rights, the people are met by brutal force to change their thinking and motives for political change. A reality check filters out the truth that Pakistan’s democracy faces formidable turbulent challenges even at its infancy without moving forward. When elections were held in May 2013, it signaled a glimpse of a proactive change-making impulse away from the four military coups’ previously consumed precious time and opportunities to bulldoze the imperatives of systematic political change to take roots on its own. Conscientious new generations of educated and intelligent Pakistanis look for hope and are desperate to evolve a system of institutionalized political change to ensure protection of human rights, freedom and dignity and respect for law and justice and a sustainable future. Not so, the traditional elite comprising of the old feudal lords and most being the by-products of military coups are tantamount to dispel any signs of freedom and human dignity out of the box. At stake is the integrity of Pakistan and its future under the old echelons of the few thugs and political conspirators. Those who sabotaged the political change process include the Bhuttos, Zardari, Sharif and few infamous Generals producing the junk history.

The so called politicians have stolen few adhesive labels from the contemporary history to claim political parties: The Muslim League (N), The Muslim League (Q) The Muslim League ( H), The PPP, The National Awami Party, The MQM and lot more. Analyzing critically, these turn out to be just titles, names and fake images carved out by individuals and small vested interest groups who could not find a place in people’s thoughts and inspiration for the good of Pakistan. Across the Pakistani public mind, they are no more than transitory migrating birds that come to grab political powers through intrigues and backdoor conspiracies and in some case with foreign powers keen to make Pakistan a satellite for their own strategic priorities. All rational calculations point out to a new people’s spirit and movement demanding peaceful political manifestation for the good of the country.

Pakistani nation faces many critical perils in its search for a peaceful democratic future.

It is challenging to talk about the current perils that the society faces with unknown serious implications for its future-making, as often prevalent political wickedness will try to silence the truth tellers to bring the real issues to public mind and stance. Those who assume power via intrigues, political corruption would not relinquish it without a powerful jolt from the masses. Miss Bhutto, Nawaz Sharif and Asif Ali Zardari were no angels or moral political characters but essentially the by-products of most corrupted illegitimate democratic system of governance in Pakistan. It would be hard for historian to find a rationale and justification for the time and opportunities these individuals took to undermine the political future of Pakistan. Enriched with egoistic political imagination of their own, they dreamed of glory and triumph at the cost of ruthlessness, corruption, degeneration and viciousness. The present and future generations are captives of their favorite perversions and political insanity.

No wonder, why Islamabad is under continuing siege by the political activists – one group is led by the new generation activist Imran Khan, the former captain of Pakistani cricket team. The other by a religious scholar Dr. Tahir -ul -Qadri, whose Lahore Minhaj ul-Quran Center was brutally attacked by the police resulting in massacres of many peaceful participants and wounding hundred of others for no obvious reason. It is hard to imagine how rationality could overcome insanity being perpetuated by the Sharif brethren at provincial and national levels over the Pakistani nation. None appear to signal the scenarios of peaceful transformation of serious issues into workable solutions. Lacking political imagination and legitimacy, Sharif brethrens have used power to deal with sensitive issues of public communication and result-oriented political dialogue. Political failure and corruption allegations are nothing new to the profile of Nawaz Sharif. He was twice dismissed as Prime Minister on corruption charges. Do the Pakistani electorates know the value of their vote at the ballot box when and if they had opted for Sharif to be the next political leader?

Vengeful and paranoid, Nawaz Sharif is eager to maintain the Muslim League (N) powerhouse even though he is alleged to have rigged the outcome of the 2013 national elections. Some of his close party associates appear resentful of police actions against the demonstrators. The news media reports cite two members of the Pakistan Election Commission confirming Imran Khan’s allegations that last year elections were rigged by Sharif. This is a critical problem in need of legal discourse and justice. The endless political lies and deceptions by the ruling elite have created a delusional culture of governance in Islamabad. It is woeful how publicly known thugs, crime riddled people have come to facilitate political governance over almost half of a century in Pakistan. They overwhelmingly dominate the political thinking for elections, buy and sell people’s interests, support institutionalized system of corruption, uneducated people lacking moral and intellectual values assume power- the known political imperatives turned beliefs into talking points and emotional crutches – making masses stand firm against the odds of being fired at or getting killed. Reports indicate that Sharif has brought-in special police units from Punjab replacing the Islamabad security apparatus to ensure swift action against the demonstrators.

This was the time and opportunity for REASON and political dialogue and not for flying bullets, public beating and crushing the will and spirit of the people for political change. Pakistani politics tells clearly being a house of liars and self-egomaniac people and Sharif is doomed failure. The Army Chief of Staff General Raheel Sharif has cautioned the Prime Minister Nawaz Sharif to resolve the issues by peaceful means. It is hard to imagine that Nawaz Sharif is a man of any principles to leave the office under moral scrutiny or logical persuasion unless pushed out by force.

Pakistan’s enemies are within not elsewhere. Nawaz Sharif (The Muslim League (N) is a stolen name and reference from the Pakistan freedom movement and his associates are mostly nameless and shapeless political characters. They enjoy life on public time and money and depleting monetary resources. Across the nation, trade and commerce are at a standstill. Common people have been deprived of their livelihood by massive public demonstrations and sitting-in at Islamabad. Law and justice are terribly ruptured by the political meddling of the few and their self-geared priorities. Pakistan’s freedom, integrity and economic lifelines are being undermined by the ruling elite. They have no sense of time and history how the future will happen in a logical and peaceful manner of co-existence between the rulers and the ruled. Pakistan’s worst enemies are those who are unable to listen to voices of reason and peaceful activism for change. Even if Sharif calls the joint house of the parliaments, ordinary people know well that Sharif must go.

Democracy without people is not a democracy but autocracy and absolute authoritarianism in full swing shedding public blood and destructions to maintain neo-colonial law and order. The use of security forces and power against the people will not resolve the problems – the absolute power, a draconian strategy to dispel the notion of freedom. It is shameful for a functional democracy if any and as harmful in short terms as deadly and anti-freedom in long terms for the sustainability of a free nation. The ruling elite and the people live in a conflicting time zone being unable to understand the meaning and essence of the Pakistan Freedom Movement. Pakistan faces multiple chronic problems which could undermine its future. What is the cure to the current problems? There is no magic pill to deal with all critical situations except a comprehensive new approach for ‘Anew Pakistan’ originating out of the corrupt box to imagine political change and institutionalized developmental future.

The masses have experienced tormenting pains and hopelessness for too long. Nawaz Sharif is not a leader of any vision, or proactive leadership traits. His political past and present is a burden on the moral and intellectual conscience of informed Pakistanis. Nawaz Sharif must go. The allegations of election rigging must be investigated. It will provide a logical breathing space for a planned and workable remedy to a highly critical political crisis and for a sustainable Change goal – if a new Government of National Unity is formed under a non-partisan and non political leader of moral and intellectual integrity for a period of two years; a New Constitution is framed with new public institutions under leadership of new generation educated people and then a new election could give meaning and clarity to the purpose of democracy and to transform the ideals of a progressive legitimate functional democracy. In “Pakistan: Anatomy of Turbulent 68th Independence Day” (The Cyrano’s Journal Today, USA: August 14, 2014), this author offered the following plausible solution to the current crisis and a foresight to safeguard the political future of Pakistan.

All the monsters of history are to be found among the absolute leaders exercising absolute power in disregard of the interests of people. The milestones appear clear and the message well articulated by the masses that Sharif must go. He is not a leader with any rational political imagination to envisage any plan for political change and nation-building..Moral and intellectual corruption and gangsterism is the order of Pakistani politics operated by the few families. Sharif and his associates have stolen millions to buy real estates in UK and elsewhere. So did Asif ali Zardari, Benazir Bhutto and Musharaf too. All enjoy records of dismissal on corruption allegations and charges… The ideals of the Pakistan Freedom Movement must be revisited and incorporated into the making of the future. To undo the darkened past and reshape the turbulent present, Pakistan desperately needs educated people of new generation and ideas, equipped with visionary and proactive ideals to rebuild public institutions and essential political capacity to safeguard the national integrity, survival and future as a Muslim Nation moving forward to pursue progressive political change and social and economic development infrastructures for the deprived people.

The nation is boxed in by most cruel, incompetent and unproductive politicians. Its agriculture heartlands are increasingly becoming barren, business is destroyed, trades, commerce and social lifelines are ruined by the bogus War on Terrorism, public trust is crippled and creativity for change is crushed by ruthless authoritarian rulers. The masses are fed up with daily sectarian killings and political bloodbaths. None of the politicians seem to have standing to regain societal trust and restore normalcy to public law and order. Pakistan urgently needs a savior, not Sharif or the few Generals. The solution must come from the thinking people of the new educated generation – the intelligent Pakistanis to facilitate hope and optimism for a sustainable future of the beleaguered nation.