Hundreds of families seek shelter across the border to escape fighting between government forces and Taliban fighters.

Hundreds of Pakistani families have fled into neighbouring Afghanistan following a surge of clashes between Pakistani government forces and fighters, an Afghan government official has said. 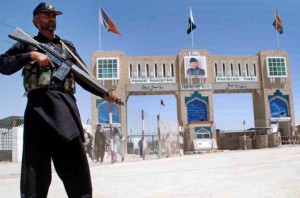 Pakistani government forces have been launching air strikes against Pakistani Taliban fighters in a northwestern valley near the Afghan border in recent days, after Taliban fighters raided the country’s biggest airport in Karachi late on Sunday.

Millions of Afghan civilians have for decades sought shelter in Pakistan to escape war in their homeland but the fighting in Pakistan this week has sparked a rare flow of civilians the other way.

“Around 300 Pakistani families have escaped because they are worried about fighting between Pakistani forces and Pakistani Taliban,” Jabar Nahimi, governor of eastern Afghanistan’s Khost province, over the border from northwest Pakistan, told the AFP news agency.

“We have provided aid for 100 of these families and the rest will be helped soon… We have also provided vaccinations as we are concerned about polio,” he added.

Both Afghanistan and Pakistan are facing threats from al-Qaeda-linked Taliban factions but relations between the neighbours are more often marked by mutual suspicion, and even hostility, rather than cooperation on security.

Pakistan for years supported the Afghan Taliban , who are fighting to expel US-led foreign forces from Afghanistan, while battling the Pakistani Taliban at home.

Missile-firing US drone aircraft have also, for the first time in six months, attacked fighters this week in Pakistan’s North Waziristan region, a lawless stronghold on the Afghan order.

Some Pakistani Taliban fighters, who want to overthrow the Pakistani state, are based in mountain hideouts in eastern Afghanistan, from where they launch raids into Pakistan.

Pakistan is considering a full-scale offensive against Pakistani Taliban fighters in its northwest which would likely push more villagers across the largely unmarked border into Afghanistan.