ISLAMABAD: The government informed the Senate on Monday that the draft of a bill for curbing cyber crimes had been finalised and would soon be presented before the cabinet for approval. Winding up a debate on a motion tabled by PPP’s Karim Khawaja on the increasing trend of cyber crimes in the country, Minister of State for Interior Balighur Rehman criticised the last PPP government for not bringing any legislation after the lapse of the previous law in 2009. 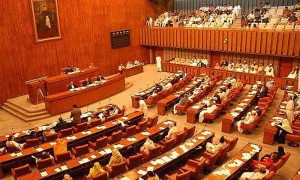 He said a centre on cyber crime had been functioning under the Federal Investigation Agency (FIA) and computer experts were working there round the clock. He claimed that grey-trafficking had dropped and tax evasion of Rs1.5 billion had been prevented last year. He said the firewall installed at the Nadra database was very effective and could not be hacked.

Leader of the House Raja Zafarul Haq stressed the need for giving more attention to the issue of cyber crimes since it had become a “matter of country’s survival”.

Mushahid Hussain of PML-Q called for establishing the country’s own server and said emails sent through hotmail, yahoo and gmail were being monitored by the United States. Besides, he added, social networking sites like Facebook and Skype were being used for terrorist activities.

Talha Mehmood of the JUI-F said SIMs issued in Afghanistan were being used for terrorism and kidnappings in Pakistan.

Meanwhile, speaking on points of order, the senators, mostly members of the house defence committee who had last week visited coastal areas of Balochistan, emphasised the need for activating Gwadar port as early as possible.

A private bill seeking to strengthen laws to prevent honour killings was introduced by PPP’s Sughra Imam. The chairman referred it to the standing committee concerned.

The Anti-Honour Killings Law (Criminal Laws Amendment) Bill 2014 seeks amendments to the Pakistan Penal Code of 1860 and the Code of Criminal Procedure of 1898 to remove loopholes in the laws.

The “Statement of Objects and Reasons” attached to the bill says, “Honour killings are common throughout Pakistan, claiming the lives of hundreds of victims every year. According to Aurat Foundation’s statistics, 432 women were reportedly killed in the name of honour in Pakistan in 2012, 705 in 2011, 557 in 2010, 604 in 2009 and 475 in 2008. These figures do not include unreported cases and the number of men who are often killed alongside women in the name of honour. Addressing the loopholes and lacunae in the existing laws is essential in order to prevent these crimes from being repeatedly committed.”