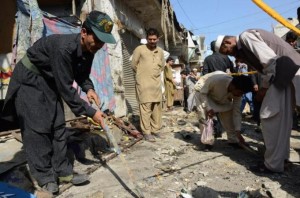 Eight people, including five policemen, have been killed in two attacks in northwest Pakistan, officials say.

Pakistani police said the attacks took place on Tuesday morning on the outskirts of Peshawar city and in the neighbouring district of Charsadda.

Najeeb Ur Rehman, a police official, told the AFP news agency that the ambush was carried out by a group of gunmen, although exact numbers were unknown.

“When policemen tried to move to a safer place another group of attackers opened fire from that side,” she said.

Another officer, Shafiullah Khan, told the AP that two civilians were killed in Charsadda when a bomb rigged to a motorcycle exploded close to a police van. Another 30 people were reported injured.

Nasir Durrani, provincial police chief, told the agency that the attacks could be retaliation for recent arrests of rebels in the region.

The incident took place days after the Pakistani Taliban refused to extend a one-month ceasefire that began on March 1 to help a long-stalled peace process, complaining of a lack of movement from the government side.

The government of Nawaz Sharif began negotiations with the Pakistan Taliban through intermediaries in February.

More than 6,800 people have been killed in bomb and gun attacks in Pakistan since the group began its armed rebellion in 2007.