At least 110 people killed across Pakistan and nearly 100 in Indian-administered Kashmir as officials warn of more rain.

Heavy monsoon rains and flash floods have killed 110 people and injured 148 across Pakistan, while nearly 100 have died in India-administered Kashmir, as officials warn of more rain in coming days.

Ahmad Kamal, a spokesman for Pakistan’s National Disaster Management Authority, said on Saturday that at least 61 people had died in the eastern Punjab province since Thursday. 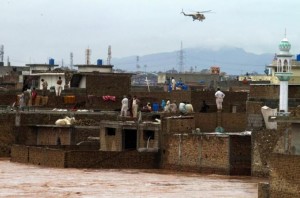 Kamal said another 38 people died in Pakistan-administered Kashmir and 11 had died in northern Gilgit Baltistan province.

“We are dispatching tents and other relief items for those who have been affected because of rains and floods,” he said.

Authorities fear the death toll may rise as more flooding and rain is forecast for the coming days.

Pakistan’s army has mobilised troops, boats and helicopters to aid in the rescue effort, with operations taking place in Gujranwala, Sialkot, Rawalpindi, Mandi Bahauddin, Khanki, Qadirabad and parts of Pakistan-administered Kashmir, the military said in a statement.

Tribunes’ Syed Nabeel, reporting from Islamabad, reports “Pakistan has suffered several years of massive yearly flooding since 2010, which has resulted in millions being displaced every monsoon season. Rescue efforts are currently underway in several areas, but heavy rains are continuing in many of these areas.”

It said authorities had briefed Prime Minister Nawaz Sharif on Saturday about the floods.

Pakistan’s meteorological service said “widespread rain-thundershowers” were expected on Saturday in various parts of the country.

In India-administered Kashmir, Chief Minister Omar Abdullah said on Friday that the floods have so far claimed nearly 100 lives, as rivers in the region flow above the danger mark due to incessant rains.

During a rescue operation, rescuers recovered the bodies of at least 50 members of a wedding party aboard a bus that was washed away by flash floods on Thursday.

Farooq Ahmad, a local man, told a reporter on Saturday that the administration had not taken concrete steps to drain the flood water out of residential areas.

“We have been facing many problems. Yesterday, the rain stopped for some time, but today it started again,” he said.

“We cannot even go inside, as the water has entered our houses. People, shopkeepers and office goers are facing problems. We are helpless.

“This is being done by God. The administration should also do something about where to release the water.”

The state’s main river Jhelum and its tributaries are flowing several feet above the danger mark. The river flows into the Pakistani side of the disputed region.

All schools and colleges remain closed and exams postponed.

Rajnath Singh, India’s interior minister, held a meeting in New Delhi to review the flood situation and dispatched members of the National Disaster Response Force to assist the state government.