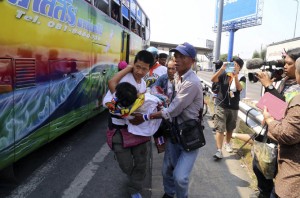 A Thai protester has been killed and four people wounded in a shooting at an anti-government march in the capital Bangkok, medical officials have said.

The shots were fired at a bus and a flatbed truck carrying demonstrators to their camp in central Bangkok after they had protested at a government office complex just north of the city, the AP news agency reported.

Paradorn Pattanatabut, a security advisor to the Prime Minister Yingluck Shinawatra, said that initial intelligence suggested that the shooting was politically motivated.

The assailants fired unseen at a bus and a truck carrying demonstrators to their encampment in central Bangkok after they had protested at government offices north of the city.

A protest guard, Nasser Yeemah, said two women on a bus and two guards on a sound truck were wounded by the gunshots.

The Erawan Medical Centre, which monitors hospitals, said a 52-year-old man had died and four others were wounded in the incident.

It brought the death toll to 24, with scores wounded, since protesters took to the streets in November, in a bid to force Yingluck from office.

The splinter group that was attacked, the Network of Students and People for the Reform of Thailand, has often been at the vanguard of attempts to storm state buildings during five months of the protests.

“The shooting lasted for around two minutes, the convoy stopped and everyone took shelter as they raked bullets over the vehicles,” group leader Uthai Yodmanee told AFP news agency.

The protesters want Yingluck to resign to make way for an interim government to initiate anti-corruption reforms.

Yingluck on Monday defended herself against charges of dereliction of duty in overseeing a contentious rice subsidy programme.

The case, under consideration by the National Anti-Corruption Commission, could lead to a suspension of her duties and eventual impeachment by the Senate.

On Wednesday, the Constitutional Court will decide whether to consider a petition from a group of anti-Yingluck senators asking for a ruling on whether she violated the constitution by transferring her National Security Council chief to another position. Another court already ordered him restored to his job.