A man is dead, a truck driver has severe injuries and two people have been struck by lightning as wild weather battered Sydney.

A month’s worth of rain fell on parts of the city on Monday afternoon as an area of low pressure passed slowly over the city towards the Illawarra, bringing chaos, death and destruction.

Sydney’s south bore the brunt and at Lucas Heights a man died after being washed into a storm water drain. 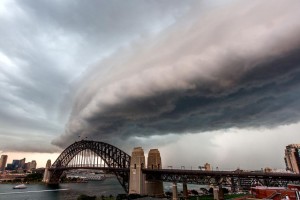 Paramedics were called to the Lucas Heights Waste Management and Recycling Centre on New Illawarra Road at 3.15pm (AEDT), but were unable to save the man.

He died at the scene and is believed to have drowned.

“Unfortunately there was nothing we could do,” a NSW Ambulance spokesman told AAP.

The waste management plant is operated by SITA.

At Tregear, in Sydney’s southwest, a truck driver was trapped in his cabin after crashing into a power pole.

The male driver, aged in his mid-40s, had to be cut from his vehicle and suffered severe leg injuries in the accident, that happened just after 2.30pm (AEDT).

He was taken to Westmead Hospital in a stable condition.

Meanwhile, two men were hit by lightning about half an hour apart in the city’s south.

A man in his 50s was struck at Cronulla about 2.45pm (AEDT). He was taken to hospital suffering blurred vision.

He lost consciousness for a short period and was hospitalised.

The State Emergency Service (SES) received more than 160 calls for help, with flash flooding affecting homes and a number of trees falling in parts of Sydney.

“There have been two flood rescues of people in vehicles, at Bexley and at Milperra,” the SES said.

“There have also been reports of flash flooding around Alexandria, Zetland and Botany and along Parramatta Road.”

The Bureau of Meteorology said 98mm of rain fell in the Royal National Park, south of Sydney.

The median monthly rainfall for Sydney is 97mm.

The forecast for Tuesday is easing showers.