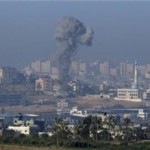 GAZA CITY (Ma’an) — Two children were killed and more than 12 people injured as two houses were bombed in northern Gaza early Sunday, a Gaza official said.
The casualties were evacuated to Gaza hospitals after an Israeli airstrike hit the homes in Jabalia camp, Ministry of Health spokesman Ashraf al-Qidra said.
Medics identified the two children as Tamer Abu Asaifan and one-year-old Jumana Abu Asaifan.
Witnesses said Israel’s aerial bombardment of Gaza continued with intensity overnight. Israeli shelling pummeled Beit Lahiya in northern Gaza, while fighter jets struck southern Gaza.
One airstrike damaged a complex of media offices in Gaza City, injuring six journalists, a Ma’an correspondent said.
Meanwhile, Israeli gunboats shelled the coastline of Gaza City and central Gaza, eyewitnesses said.
Hamas chief Khalid Mashaal was in Cairo on Saturday for talks on a potential truce to end the bombardments, which have killed some 50 Palestinians over four days.
Egyptian President Muhammad Mursi said on Saturday there were “some indications” a ceasefire could be reached soon between Israel and Gaza Palestinians but he had no firm guarantees.
A Palestinian official told Reuters the truce discussions would continue in Cairo on Sunday, saying “there is hope,” but it was too early to say whether the efforts would succeed.