November 14, 2012. When President Obama tried to get a real Middle East peace process going by calling on Israel to halt its illegal settlement activity and his “Yes, we can” became “No, we can’t”, I dared to invest some hope in the idea that in a second term he would use the leverage all presidents have to oblige Israel to end its defiance of international law and be serious about peace on terms the Palestinians could accept. And that investment was not the consequence of mere wishful thinking on my part.

There were two main reasons for my cautious optimism.

The first was (and is today even more so) in the fact that behind closed doors in Washington D.C. top military and security people are completely aware that it’s no longer in America’s own best interests to go on supporting the Zionist (not Jewish) state right or wrong.

The second was my knowledge from sources I trust that Obama has always understood that without an acceptable measure of justice for the Palestinians there could be no end to the conflict, only catastrophe for all. When he was preparing for his first run for the White House, he told a close American-Palestinian friend not to expect too much from him in his first term but to be optimistic about what he could and would do in a second term. (I took that to mean that Obama was fully aware of a fundamental truth expressed to me by former President Carter. As I have stated in previous articles, he said that any American president has only two windows of opportunity to take on the Zionist lobby, the second window being the last year of his second term – i.e. after the mid-term elections of the second term).

Today there is a third reason for cautious optimism. It was summed up in a Ha-aretz headline over an article by Akiva Eldar on 12 November – American Jews are giving up onIsrael.

His opening two paragraphs were the following:

The most worrying news that came out of theU.S.presidential elections was that American Jews seem to have lost interest inIsrael. Just 10 percent of American-Jewish voters saidIsraelwas their highest priority when they went to the polls, according to a recent exit poll conducted by the pro-peaceIsraellobbyJ Street. Nine out of 10 said domestic issues like job rates and health care were their top concerns. This is despite the fact that the Republicans and Jewish activists, many of whom are supporters of Prime Minister Benjamin Netanyahu, told countless horror stories about what they described as Barack Obama’s plot to throwIsraelto the Iranian wolves.

These statistics support the analysis of political commentator Peter Beinart, an associate professor at the City University of New York’s Graduate School of Journalism, who argues that the ongoing occupation and the revelations of Israeli racism have distanced American Jews fromIsraeland from the Zionist idea.

And then there’s this. For a recent study two researchers from the CaliforniaStateUniversityand the HebrewUnionCollegeasked young American Jews whether they would regard Israel’s destruction as a personal tragedy. Fifty percent said they would not.
In a commentary on this finding for theConnecticut edition of the Jewish Ledger, Eric Mandel (a supporter ofIsrael right or wrong) asked why young American Jews do not feel connected toIsrael. His answer included this:

“One explanation is that many young American Jews feel that Zionism conflicts with their liberal values. Raised on the ideal of universalism and exposed to post-nationalist ideology on campus, they cannot grasp how a nation state of and for a particular people is not racist by definition.

“More importantly, many young Jews are compelled by the Palestinian narrative of victimhood. They have internalized the belief that the underdog is always an innocent victim and holds the moral high ground, and they cannot give their allegiance to the ‘oppressor.’ The anti-Israel bias at many schools, particularly in Middle East studies departments, reinforces these negative views, as does the propaganda of anti-Israel campus movements like BDS. There is cause for concern that the American Diaspora’s support for Israel will not be inevitable.”

What all this suggests to me is that a growing number of American Jews are beginning to understand that it’s only by distancing themselves from the Zionist monster that they can best protect their own interests. As I have previously argued (it bears repeating), what we are witnessing in the world today is a rising global tide of anti-Israelism, which is NOT anti-Semitism. The danger is that it could be transformed into classical anti-Semitism if American and European Jews do not distance themselves from the Zionist state and its crimes.

It has never been a secret that the Zionist lobby in all of its manifestations does not speak for most American Jews. In recent years, for example, polls taken by various Jewish institutions and organizations have indicated that AIPAC, the dictator of American policy on all matters to do with the Israel-Palestine conflict, represents the views and wishes of not more than 25 per cent of American Jews.
If the process of American Jews distancing themselves from an arrogant, aggressive, oppressive, racist and unbelievably self-righteousIsrael really is underway, a second-term President Obama will be more free than any of his predecessors (though perhaps not until his last year in office) to take on, isolate and see off the Zionist lobby.

As Gideon Levy noted in one of his most recent articles, evenIsraelitself “needs of a furious and determined American president”. Why? Because such a president would beIsrael’s “last chance to save itself from the curse of the occupation.” Levy also expressed cautious optimism on the grounds that “the second Obama is expected to have greater self-confidence and be less concerned with considerations of survival than the first Obama.”

Another indication that events in America may be moving in a direction that would enable a second-term President Obama to put America’s own interests first and use the leverage he has to require Israel to be serious about peace was touched upon by Thomas Friedman in a recent article for the New York Times. His main point was that his president would be so busy with pressing domestic issues that he won’t have time to address Israeli matters. But he, Friedman, had a message for Israelis. It was that they had to understand “that we’re not your grandfather’sAmericaanymore.” His explanation of why included this:

“To begin with, the rising political force in America is not the one with which Bibi has aligned Israel. As the Israeli columnist Ari Shavit noted in the newspaper Ha’aretz last week. ‘In the past, both the Zionist movement and the Jewish state were careful to be identified with the progressive forces in the world. … But in recent decades more and more Israelis took to leaning on the reactionary forces in American society. It was convenient to lean on them. The evangelists didn’t ask difficult questions about the settlements, the Tea Party people didn’t say a word about excluding women and minorities or about Jewish settlers’ attacks and acts of vandalism against Palestinians and peace activists. The Republican Party’s white, religious, conservative wing was not agitated when the Israeli Supreme Court was attacked and the rule of law in Israel was trampled.’ Israel, Shavit added, assumed that ‘under the patronage of a radical, rightist America we can conduct a radical, rightist policy without paying the price.’ No more.” (The last two words were Friedman’s own). 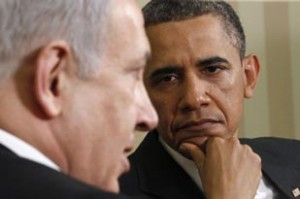 And that’s why I am not abandoning hope that at a point, most likely in the last year of his second term, President Obama will feel himself free enough to do what I truly believe he really wants to do – confront the Zionist monster, beginning with its lobby inAmerica.

(By Alan Hart; he has been engaged with events in the Middle East and their global consequences and terrifying implications.)

The Influence of Confirmation Bias on Organizations