Islands at centre of China-Japan are covered by US-Japan defence alliance, US president says as h 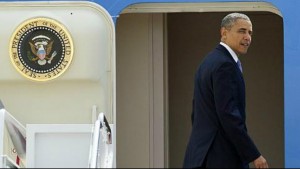 The islands at the centre of a dispute between Tokyo and Beijing are covered by the US-Japan defence alliance, Barack Obama has told a newspaper in advance of his arrival in the Japanese capital.

Obama, whose tour of Asia will also take in South Korea, the Philippines and Malaysia, is the first sitting US president to explicitly affirm that hostile action against the island chain would prompt an American reaction.

“The policy of the United States is clear – the Senkaku Islands are administered by Japan and therefore fall within the scope of Article 5 of the US-Japan Treaty of Mutual Cooperation and Security,” Obama said in a written interview with the Yomiuri Shimbun on Wednesday.

“And we oppose any unilateral attempts to undermine Japan’s administration of these islands,” he said.

Several senior US figures, including former Secretary of State Hillary Clinton and Secretary of Defence Chuck Hagel, have made similar statements, which Tokyo covets as a way to warn China away from territories it claims as the Diaoyus.

Obama’s week-long tour of Asia is being dubbed by the White House a “rebalancing” eastward of US foreign policy.

Although China is not on his itinerary, its presence will be felt on every leg at a time of complex regional disputes and questions about US strategy.

The row over ownership of the Senkakus is not new, but has burst to the fore in the last two years, with paramilitary vessels from both sides jostling in nearby waters to assert control.

In November, China declared an air defence identification zone over the East China Sea, including the skies above the islands.

“I’ve also told (Chinese) President Xi (Jinping) that all our nations have an interest in dealing constructively with maritime issues, including in the East China Sea,” Obama told the Yomiuri.

“Disputes need to be resolved through dialogue and diplomacy, not intimidation and coercion,” he said.

As well as a degree of hand-holding with Asian allies who feel a little neglected, Obama will be striving to show Beijing that the US poses no threat and does not intend to contain it.

“We welcome the continuing rise of a China that is stable, prosperous and peaceful and plays a responsible role in global affairs. And our engagement with China does not and will not come at the expense of Japan or any other ally,” Obama said.

“The new model of relations we seek between our two countries is based on my belief that we can work together on issues of mutual interest” such as “the global economic recovery, the denuclearisation of North Korea and addressing climate change,” Obama said.

“At the same time, the United States is going to deal directly and candidly with China on issues where we have differences, such as human rights,” he said.

Meanwhile in the Philippines capital, Manila on Wednesday, anti-Obama protesters opposed to the visit clashed with police.

About 100 protesters rallied at the US Embassy against an expected security pact that would increase American military presence in the Philippines.

The accord would allow more US troops, aircraft and ships to be temporarily stationed in selected Philippine military camps as a counterweight to China and as a standby disaster-response force.