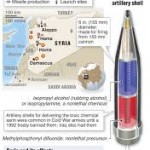 chemical weapons under international control, saying that while his approach might not have looked “very smooth and disciplined and linear,” it is focused on ensuring the weapons are not used again.

His remarks were aired on US television today as a Syrian minister labelled the agreement “a victory for Syria won thanks to our Russian friends”.

The pact, the result of talks in Geneva between the US Secretary of State ,John Kerry, and his Russian counterpart, Sergei Lavrov, last week, outlines a framework for the “complete elimination” of Syria’s chemical weapons by the middle of next year.

The deal, which was announced on Saturday, came about after the US pressed the pause button on its push for military strikes that earlier this month seemed imminent. After calling for Congressional authorisation to launch targeted strikes in response to a chemical attack in Syria on 21 August that is said to have killed more than 1,400 people, President Obama asked politicians in Washington to delay a vote while his administration had talks with Russia, a key sponsor of the Assad regime.

His critics contend that the policy shift was a sign of weakness, and handed the initiative to Russia and its President, Vladimir Putin, an staunch opponent of the use of force.

A UN report on the use of chemical weapons in the 21 August attack is due to be released today.

At the weekend, Republican senators John McCain and Lindsey Graham criticised the Geneva agreement as a “start of a diplomatic blind alley, and the Obama administration is being led into it by [Syrian president] Bashar Assad and Vladimir Putin.”

But Mr Obama, who on Saturday indicated that the US remains prepared to act militarily, has defended his approach, telling ABC’s This Week programme that “folks here in Washington like to grade on style. And so had we rolled out something that was very smooth and disciplined and linear they would have graded it well, even if it was a disastrous policy.”

In the interview, which was recorded on Friday, he added: “[But] we now have a situation in which Syria has acknowledged it has chemical weapons, has said it’s willing to join the convention on chemical weapons, and Russia, its primary sponsor, has said that it will pressure Syria to reach that agreement. That’s my goal.”

Disclosing that he had exchanged letters with the new Iranian president, Hasan Rouhani, Mr Obama added that Tehran should not view the diplomatic efforts underway over Syria’s chemical weapons as a sign that US was not willing to employ force, either in relation to the chemical weapons issue or over the question of nuclear weapons, which the US has warned Iran against.

“My suspicion is that the Iranians recognise they shouldn’t draw a lesson that we haven’t struck – to think we won’t strike Iran. On the other hand, what they should draw from this lesson is that there is the potential of resolving these issues diplomat-  ically.”

A Syrian minister, meanwhile, portrayed the Geneva deal as victory for Damascus. Ali Haider, Syria’s Minister of National Reconciliation, told the Russian state news agency RIA Novosti that the agreement was “the achievement of the Russian diplomacy and the Russian leadership.” The Syrian opposition condemned the diplomatic initiative, with the Syrian National Coalition (SNC) calling for the ban on the use of chemical weapons to be extended to the use of regime air power and ballistic weapons against population centres.

“The Assad regime has a long track record of deceit when it comes to dealing with the treaties and empty promises in the regime attempt to buy more time,” the SNC said.

General Salim Idriss, head of the Syrian Military Council, claims that Syria has already started to move chemical materials and weapons out of the country, into Lebanon and Iraq. Iraq has denied the allegations, calling them “cheap propaganda.”

Q. What is the agreement?

A. Following talks in Geneva, the US and Russia have agreed to work on a UN Security Council resolution that would secure and destroy Syria’s chemical weapons stocks and remove its capability to produce such weapons. The resolution would come under Chapter 7 of the UN charter, which allows for military action. But US officials have acknowledged that Russia would veto such a step and they do not contemplate seeking authorisation for the use of force.

Q. Is a military option off the table?

A. No. The US has indicated that it retains the right to strike militarily if Syria does not comply with the agreement, a point reiterated by the US Secretary of State, John Kerry, yesterday when he said that “the threat of force is real”.

Q. What are the next steps?

A. On Saturday, Syria was given a week to submit a “comprehensive listing… of its chemical weapons agents, types of munitions, and location and form of storage, production, and research and development facilities”. Next, the US and Russia have agreed that international inspectors should be on the ground in Syria by November and complete their initial work by the end of the month. They must be given “immediate and unfettered” access, and the destruction of chemical agent mixing and equipment must be completed by the end of November. The final goal is the “complete elimination” of all of Syria’s chemical weapons stocks, material and equip- ment in the first half of next year.

Q. What are the challenges?

A. Numerous. Despite Russia’s influence with Syria, there is no indication that the Assad government will sign off on the details of the agreement. The US and Russia do not agree on the number or whereabouts of Syrian chemical weapons sites, and how the safety of inspectors would be ensured is uncertain. Ultimately, no specific penalties for Syrian noncompliance have been agreed. AP