US urges candidates to allow probe on fraud claims, while avoiding ‘extra-constitutional’ steps to undermine government.

US President Barack Obama has spoken with Afghan presidential contender Abdullah Abdullah and rival Ashraf Ghani to urge calm and to call for a review of fraud charges in that country’s election, the White House said. 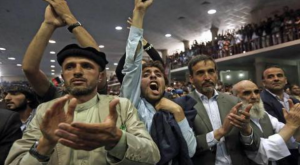 The White House said Obama told both candidates that the US expects fraud allegations to be thoroughly reviewed, urging the two men to seek a resolution that does not undermine Afghanistan’s fragile national unity.

“He reiterated that all parties should come together to work towards a resolution that represents the will of the Afghan people and produces a government that can bring Afghanistan together,” the White House statement said.

Obama called Ashraf Ghani late on Tuesday, after he spoke to Abdullah Abdullah on Monday. Abdullah had earlier claimed of being cheated in the run-off vote.

The warning appeared to be directed mostly at Abdullah, who told thousands of supporters earlier on Tuesday that he would declare victory, amid calls from some of his supporters for him to form a “parallel government.”

Abdullah claimed massive electoral fraud was behind the preliminary results from a runoff vote that put him a million votes behind Ghani.

Ghani has denied accusations that the runoff vote was rigged, saying “political discussions” were needed in order to ensure the results of the country’s presidential elections were accepted by all.

“We are asking the complaints commission to unilaterally accept our recommendation to carry the most intensive audit in the history of any election in the world or in this country,” Ghani told reporters in Kabul.

The outcome was a sharp turnaround from the first round of voting on April 5, when Abdullah got the most votes, with 46 percent to Ghani’s 31.6 percent.

Abdullah has called on the election commission to re-examine 11,000 ballot boxes – about half the votes cast in the runoff. Ghani’s team has agreed to a review of 7,000 ballot boxes.

The White House said Obama made clear there was “no justification” for resorting to violence and said such a move would lead to the end of US support for the country.

“Any such move would cost Afghanistan the financial and security assistance of the United States,” White House spokesman Josh Earnest said.

Serious allegations of fraud have been raised but they have yet to be adequately investigated, Earnest said.

“The preliminary results are not final or authoritative and may not predict the final outcome,” he said.

It is unusual for a US president to speak to foreign political candidates during an election, but Obama thought it was important to reach out given the US interest in maintaining stability in Afghanistan, the White House said.