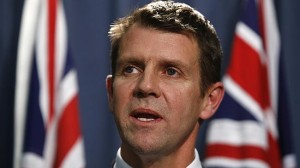 The big winners are Andrew Constance, who replaces Mr Baird as treasurer, and Pru Goward, who becomes the new planning minister.

Brad Hazzard has been promoted from planning to Attorney-General, at the expense of Greg Smith.

The reshuffle also hands Gladys Berejiklian, who represents the Sydney electorate of Willoughby, the North Coast ministry, in addition to her transport portfolio.

Mr Baird, who is from the northern beaches electorate of Manly, replaces Mr O’Farrell as Minister for Western Sydney.

He said it was “entirely appropriate” he represented the west given the many infrastructure projects being built there.

“I’m going to be there a lot,” the premier said.

Mr Baird said the new team represented renewal for the state, and would be unchanged in the lead up to the election.

“It is a group that brings experience but just as importantly, it brings a hunger,” Mr Baird told reporters of his new team.

“A hunger to make this great state even greater. A hunger to transform NSW.

“This team will build on the outstanding achievements of the past three years and accelerate the delivery of vital new infrastructure and improved services, which is what the community expects.

“We are well on track to repair NSW Labor’s $30 billion infrastructure backlog and boosted frontline services with 5,000 extra police, teachers and nurses.

“But more needs to be done, and this is the team to deliver it.”

He described Mr Smith as a “good man and a good friend” but stood by his decision to replace him as Attorney-General.

“I’ve had to weigh up what I think is the right team to take us forward, to provide a renewed focus on how we can turn this great state to an even greater state,” he said.

“Part of that involves some difficult decisions … but I strongly think that they were in the right long-term interests of this state.”

Mr Smith issued a release announcing thsat he was looking forward to fighting for his consituents on local issues.

“It has been a privilege to serve the people of NSW in the O’Farrell government as Attorney General and Minister of Justice for three years,” he said.

“In that time, I have initiated reforms of bail and sentencing laws, introduced ‘one punch’ unlawful assault laws, and reform of Corrective Services and Juvenile Justice.

“I believe these, and many other initiatives, will continue to make the NSW legal and criminal justice system the best in Australia.”

Dumped National Party minister Don Page announced he would retire at the 2015 election and Deputy Premier Andrew Stoner said he “wouldn’t be surprised” if dumped minister George Souris came to the same decision.

The announcement came an hour after veteran north coast Mr Page said he was retiring from politics.

Mr Baird confirmed the Nationals MP had been demoted from Local Government Minister and paid tribute to his service to the state.

Outgoing Environment Minister Ms Parker said she was proud of her achievements during her three years in the position.

“As a member of Cabinet I am proud to have taken this opportunity to exercise my conscience as we made very difficult decisions,” she said.

“I urge my colleagues to remember that good policy, integrity and the wellbeing of the community should always be our guiding motivation.”

“The new NSW Liberal and Nationals Cabinet has the right mix of experience and fresh faces to continue delivering strong and stable Government for regional NSW,” he said.

“The changes to the front bench offer generational renewal as well as stability in key portfolios, and gives the NSW Government the best team to take to the next election.

“Troy Grant and Paul Toole have been promoted into Cabinet and have the talent and background to excel in their new portfolios, while Kevin Humphries’ promotion will help ensure the protection of our precious land and water resources.”