The human nose can detect one trillion different odours, far more than we previously thought, say US scientists. 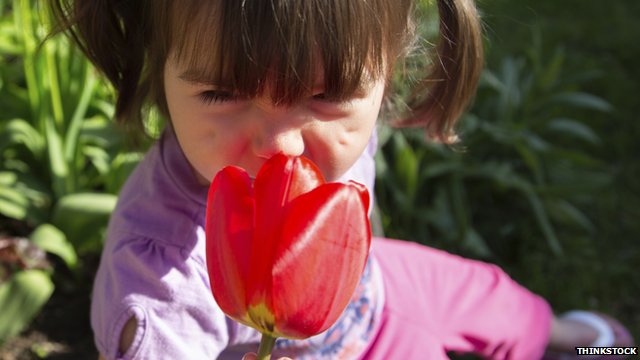 Until now, the long-held belief was that we can sniff out about 10,000 smells.

New estimates published in Science suggest the human nose outperforms the eye and the ear in terms of the number of stimuli it can distinguish between.

Researchers at the Rockefeller University say we use only a tiny part of our olfactory powers.

The human eye uses three light receptors that work together to see up to 10 million colours, while the ear can hear almost half a million tones.

Until now it was believed the nose, with its 400 olfactory receptors, could detect only about 10,000 different odours.

Scientists at the Rockefeller University, New York, set out to test the idea, which dates back to 1927 and was never scientifically investigated.

They devised experiments to see how good people are at distinguishing between cocktails of 128 different odour molecules, representing a large range of smells from grass to citrus.

The molecules were mixed randomly in groups of 10, 20 or 30 to create unfamiliar smells.

The 26 people were then asked to identify a scent from three samples – two that were the same and one that was different.

Based on these results, the researchers used theory to extrapolate how many different scents the average person would be able to discriminate if they were presented with all the possible mixtures that could be made from the 128 molecules.

They estimated that the average person can discriminate between at least one trillion different odours with the nose, far more than can be detected by the eye or ear.

This is probably an underestimate, they say.

The conventional wisdom on how well we can smell was based on little more than “urban legend”, said co-author Dr Leslie Vosshall.

“It’s the first real test of how good humans are,” she told.

“People assume animals are much better smellers than us. Humans are remarkably good at smelling things.”

She said animals remain two or three times better than us at smelling, as they devote more of their brain to the sense of smell.

However, the power of the human sense of smell should not be underestimated.

“You can push the sense of smell to work harder – you can get bigger and crazier, more intense perfumes,” she added. “We are using a tiny part of our olfactory powers.”

According to Charles Spence, professor of experimental biology at the University of Oxford, while it is good to see smell pushed up the rankings of human senses, there is still a lot to learn.

“I guess no matter how many smells we can discriminate, the evidence still shows that even the best experts cannot really pull much more than three odourants out of a mixture, contrary to what all those wordy wine writers might have us believe,” he said.

Prof Stephen Liberles, of the Department of Cell Biology at Harvard Medical School, said the nose has a large number of olfactory receptors, which implies our sense of smell could be even more powerful than the latest estimate.

Commenting on the research, he said: “The research goes a long way to addressing the capability of the human olfactory system, but there are still specific questions to be answered about exactly how many individual chemicals can be perceived.”