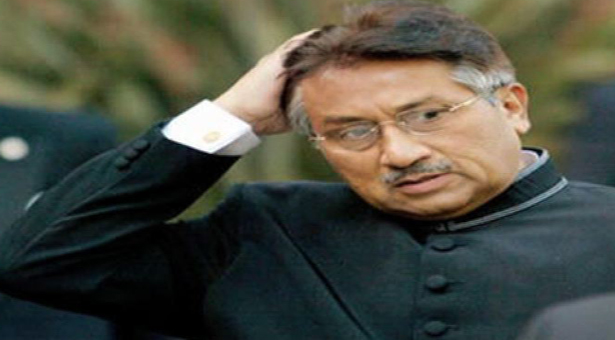 The special court has ordered for Pervez Musharraf’s warrant to be implemented on March 31. According to the order if Musharraf fails to appear before the special court by March 31 he should be arrested and presented.

Pervez Musharraf failed to appear before the three member bench of the special court on Friday with his counsel arguing that the risk of his client’s appearance could not be taken.

At the start of proceedings, Pervez Musharraf’s counsel Anwar Mansoor submitted a petition seeking his clients exemption from today’s hearing.

Mansoor argued that the plan to attack Musharraf needed to be investigated and it would take 6-8 weeks to screen personnel deployed for the former president’s security. Mansoor said his client would be appearing before the court after the screening report was presented.

During proceedings the court had provided time to Musharraf’s legal team to answer if the former president will be appearing today. Justice Faisal Arab remarked that if Musharraf’s did not appear before the court, the charges against him would be read to his counsel.

Anwar Mansoor argued that according to law it was mandatory for the accused to be present for indictment.

Prosecutor Akram Sheikh argued that if the former president was unwilling to appear at this location, his trial could be held at a jail of his choice.

The hearing of the case has been adjourned till March 20.

The special court will indict Pervez Musharraf on his appearance in the high treason case for for abrogating the Constitution while issuing proclamation of emergency on November 3, 2007.